Keiser has worked under four chancellors 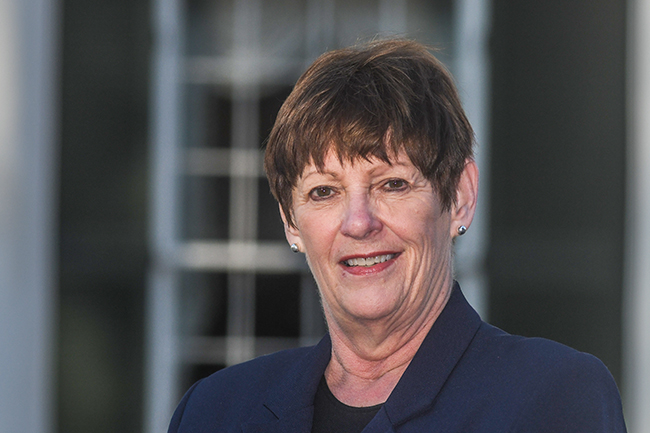 Bruce Newman Sue Keiser, outside the Lyceum at the University of Mississippi, is the Chancellor’s new chief of staff.

As a newly divorced woman with two small children, Sue Keiser moved to Oxford from Greenville in the late 1970s and began classes at the University of Mississippi where she eventually earned a bachelor’s degree in English.

She worked for local attorney Jack Dunbar for a few years. It was there she met Chancellor Robert Khayat. The two became friends and eventually Khayat asked Keiser to come work for him at the university in 1998 as special assistant to the chancellor.

Keiser was appointed chief of staff in October by Chancellor Jeff Vitter.

“I am very pleased that Sue has agreed to assume the role of chief of staff,” Vitter said. “For almost 20 years now, she has been a cornerstone for our university and brings tremendous experience, knowledge and dedication to the position.

“Sue is one of our most respected and well-known ambassadors. She is absolutely the best representative Ole Miss could have, and I rely on Sue on a daily basis.”

Since being hired by Khayat, Keiser has served under four chancellors – Khayat, Dan Jones, Morris Stocks, who served as interim chancellor for about a year when Jones left the university, and now Vitter.

Keiser said while all four men were very different in some ways, they were also similar in many ways.

“All the chancellors I have worked for have been great visionaries – they see things that they envision our university can and will become,” Keiser said. “Chancellor Khayat’s vision was to make the University of Mississippi a great American public university, and everyone – faculty, staff, students, alumni, and friends of the university – worked diligently over the years to make that happen.”

“His vision – ‘What makes us great? How do we go from great to greater? How will we get there? – is what is underway at this time,” she said. “Once again, faculty, staff, students and alumni and friends will have a chance to work out a plan to make this happen. And our university will become greater, I have no doubt about that.”

Her four bosses also had something else in common, she said.

“They were all fun,” she said. “We work really hard but we always had time to have fun.”

After watching Keiser in her job and learning all that she does on a daily basis as the assistant to the chancellor, Vitter told her her job was more like a chief of staff.

“He wanted me to have the respect that comes from the chief of staff title and he also wanted me to serve as a member of his senior leadership teams so I would be aware what was being thought about. I’m truly grateful for his confidence in me.”

Keiser’s job as chief of staff entails being a liaison to faculty, staff, students and alumni, as well as the Institution of Higher Learning Board, that governs the university.

“When our office receives questions from anybody, it is my job to get them where they need to go for answers to the questions they might have,” she said. “I don’t really know all the answers but I have been at the university long enough to know who does know them.”

She was honored with the Staff Council’s Outstanding Staff Member-Overall award in 2006.

Keiser eventually remarried and had another two children. Her husband, Edmund Keiser is professor emeritus and chair emeritus of the university’s Department of Biology. She has six grandchildren and two are currently Ole Miss students.

“I have a deep affection for the people of Ole Miss – whether it’s a new student, a new board member, alumni, or a new chancellor – I want to get to know them and help them do great things for themselves and our university.”