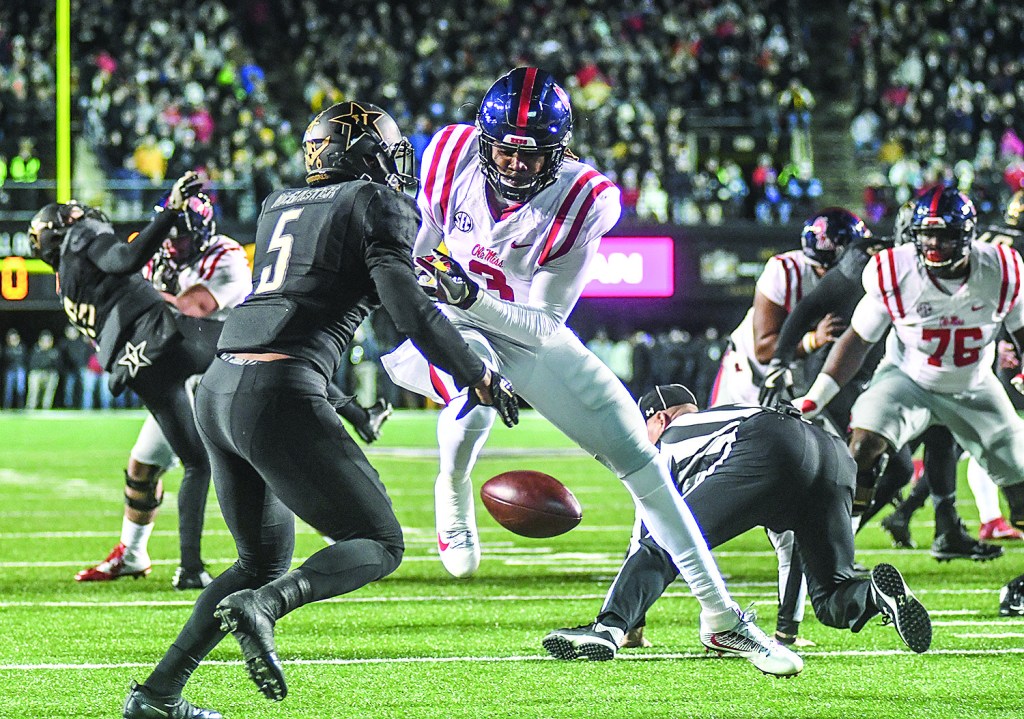 NASHVILLE — Ole Miss has had their fair share of issues and struggles this season but the offense was never one of them. Enter Saturday night and the Rebels’ 38-17 loss to Vanderbilt, putting them behind the eight ball in and needing an Egg Bowl victory to earn their fifth consecutive bowl berth.

The onus for that predicament falls squarely on the offense and their struggles to string drives together, let alone their sudden inability to hold onto the football against Vanderbilt.

It was freshman quarterback Shea Patterson’s second career start in as many games and things appeared to be continuing how they ended against Texas A&M a week prior. The Rebel offense earned an opening field goal and cashed in a Vanderbilt turnover on a muffed punt for seven points for the quick 10-0 lead. Then things took a 180-degree turn.

After the field goal, Ole Miss’ next seven drives of the first half resulted in six punts, a turnover on downs and the end of the half on a kneel down. The touchdown was a punt after the offense stalled but the turnover negated it. The Rebels were held to 188 yards of total offense in the first half.

“Defensively, (Vanderbilt) started playing a lot of odd-two high and we never found the rhythm again,” Ole Miss head coach Hugh Freeze said. “I don’t know how many drops we had. It had to be close to 10 or 12. Those are critical.”

Early in the second quarter, Ole Miss tried to steal some momentum back when Patterson hit De’Amorea Stringfellow for what looked to be a conversion on a 4 & 1 at the Vanderbilt 28, though a review of the play in the replay booth overturned the completion call and gave the ball back to the Commodores, who turned it into seven points of their own for the go-ahead touchdown and the 14-10 lead.

Drops by a group who has been the most consistent unit on the field on either side of the ball, killed drives and hurt Patterson, where he was helped by the receivers a week ago in College Station, Texas. Patterson had 22 of his 42 passes fall imcomplete, with a majority of them due to drops by Quincy Adeboyejo and sure-handed Stringfellow, who had the one-handed catch against Texas A&M to keep a drive alive.

“Overall we just didn’t execute as a whole unit,” Offensive coordinator Dan Warner said. “It’s like we went back to ground zero today.”

The running game got off on the right foot, accounting for 53 of the 75 yards on the opening drive. After that, the Rebels only rushed for 37 yards the rest of the game. A mixture of their own issues and some new looks by the Commodore defense Ole Miss had not seen on film or practiced for all week, caused for the run game to stall and Ole Miss to end the night with four three-and-outs.