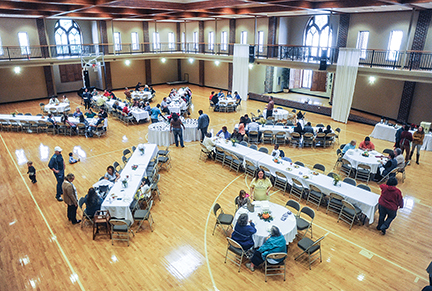 In less than 48 hours, homes across the country will be filled with wonderful smells of Thanksgiving dinner as families gather to count their blessings and enjoy the day together.

However, for many going home may not be an option, especially for University of Mississippi students who live far from Mississippi, whether across the country or the globe.

Seeing an unmet need, St. John the Evangelist Catholic Church started serving up a traditional Thanksgiving dinner about 10 years ago for those students and anyone in Oxford who might find themselves alone on Thanksgiving.

This year’s Thanksgiving dinner at St. John’s will be held from 6 to 7:30 p.m. Wednesday at the church.

Basil Richmond is in charge of cooking the turkey and hams for this year’s meal. He expects about 150 guests.

“When the Egg Bowl is in Oxford, we usually get more people,” he said.

Richmond has a large grill that will easily handle the six large turkeys and hams he’ll be cooking.

Along with turkey and ham, guests will be served traditional favorites, like sweet potato casserole and dressing.

“The parishioners make all the side dishes,” Richmond said.

While the dinner targets students who are alone for Thanksgiving, Richmond said it’s open to everyone.

“We’ll have people from the parish there and people from Oxford who want a good meal and fellowship,” he said. “You don’t need to be a student or attend St. John’s.”

The Oxford-University United Methodist Church will hold its annual Thanksgiving Dinner from 11 a.m. to 2 p.m. On Thanksgiving Day.

The church generally feeds about 250 people and is free and open to the entire Lafayette, Oxford and University of Mississippi community.

The meal is free thanks to the donations of money and food by church members and the generosity of several local grocery stores and vendors.

The cooking will be done by about 15 church volunteers who will rise early Thanksgiving morning, head to the church and preheat the ovens.

For some, the election has made it difficult for them to go home to their families due to differing political beliefs, especially in a cycle as tumultuous as the one that just ended.

David McDowell, an Ole Miss alum who recently worked on the Hillary Clinton campaign, is hosting his own “Friendsgiving” at his home for this very reason. He noticed on Facebook that there was fighting between families over who they voted for in the election.

“I didn’t want anyone to feel like they were not loved,” McDowell said. “Especially at a time when I recognize what I’m thankful for. I’m thankful for my friends and so thankful that I have loving parents. They are not politically active like I am, my mom is a republican, but when it was over, my mom posted on my Facebook, reminding me that we are blessed in order to bless others.”

McDowell says he was cautious in inviting people as he didn’t want his Thanksgiving to prevent his friends from discussing their differences with the rest of their families.

“I don’t want to get in the way of anyone’s opportunity to mend relationships,” he says, “but if they feel like it’s not there, I wanted to be the family that some people need right now.”

The one rule at McDowell’s Thanksgiving festivities? Absolutely no political talk.

“We will not be talking about it despite the fact that it’s been my entire life for one-third of the year,” McDowell said. “That’s not what Thanksgiving is about, somehow it always becomes that. This is not just for Clinton people either. If I can provide respite for a friend who doesn’t want to be around others and talk about politics and instead talk about love and kindness, then this is an opportunity to do that.”

The Pantry currently has minimal support from their primary food source, The Mid-South Food Bank, and must purchase most of it’s inventory at retail prices.

“Most pressing needs are green beans, corn, macaroni and cheese, and canned fruit,” Ann Odell said. “The ongoing support from the community is much appreciated.”

The Pantry also has a free library and would welcome books for children as well as adults.

Donations may be left at 713 Molly Barr Road Monday – Thursday. 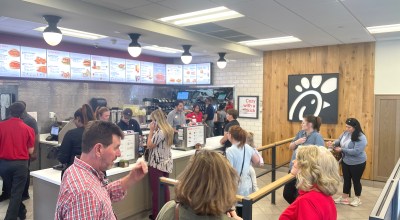 Chick-fil-A opens after more than four months of renovation