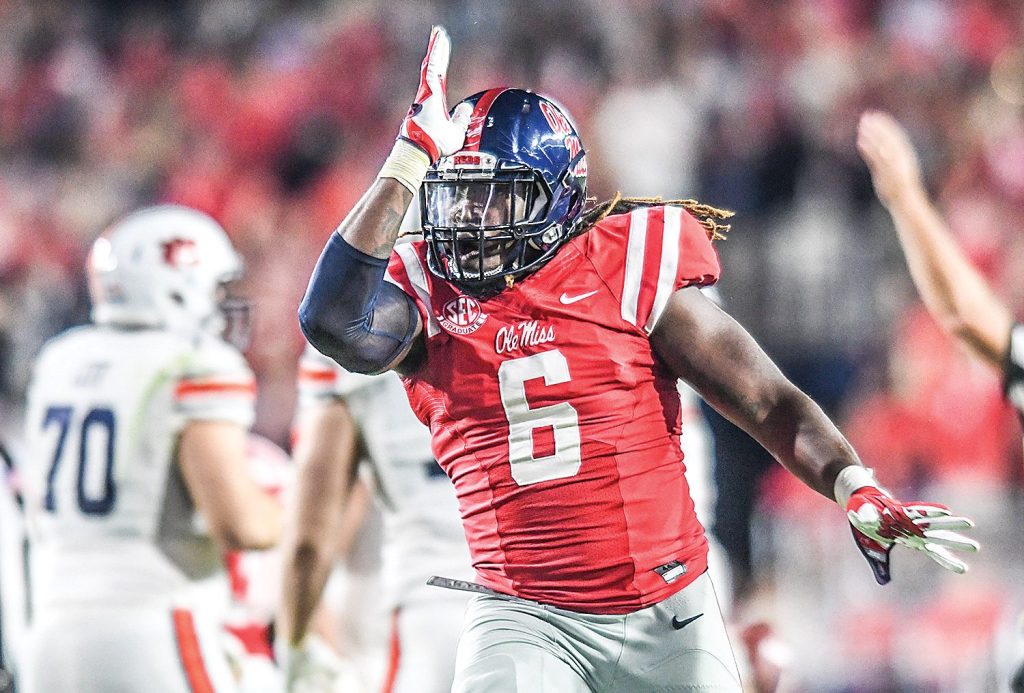 Senior defensive end Fadol Brown (6) quickly learned the significance of the Egg Bowl upon transferring to Ole Miss three years ago and will try to help the Rebels win their third straight game over Mississippi State on Saturday. (Bruce Newman)

Fadol Brown thought through the most memorable moments of his Ole Miss career, recalling his first trip to Texas A&M in 2014 and being a part of two wins over Alabama.

But none of them top playing in two Egg Bowls and winning both, and he’d love nothing more than to help the Rebels win a third straight over their in-state rival before it’s over.

“Just keeping the Egg here,” the senior defensive end said. “I’ve never lost the Egg since I’ve been here, so I don’t want to start now.”

This coming from a player who isn’t from Mississippi. Ole Miss’ roster is littered with players who don’t hail from the Magnolia State, but while the degree of experience playing against Mississippi State varies among them, they’ve been baptized into the importance of Saturday’s annual regular-season finale by those who call Mississippi home.

Brown grew up in South Carolina and signed with Florida International before transferring to Ole Miss in 2013. He sat out that season to fulfill NCAA transfer rules, but the players around then didn’t waste any time letting him know Mississippi State is the nemesis.

“DT (Shackelford), Charles (Sawyer), Carlos (Thompson), Channing (Ward), all those guys that were from the Mississippi area, they just sat me down and really explained to me just how big it is,” Brown said. “Ever since then, I have tremendous respect for this university, the fans around here, the way they carry themselves when we play this game, so it’s only right that I keep doing the same thing.”

Freshman quarterback Shea Patterson spent most of his prep career at Calvary Baptist Academy in Louisiana before playing his senior season at IMG Academy in Florida. He admitted he didn’t know much about the rivalry before signing with Ole Miss but added he’s ready for his first experience in a game he’s heard so much about.

“Obviously it’s a huge rivalry and it obviously means so much to the people in this state whether it’s a Mississippi State fan or an Ole Miss fan,” Patterson said. “I’m just going to give it my all and hopefully get these seniors to keep that Egg Bowl here.”

The same goes for Van Jefferson, a native of Brentwood, Tennessee. The second-year receiver didn’t travel with the team to Starkville for last year’s Egg Bowl while redshirting.

“It’s my first time going and playing in the game, but coach (Hugh) Freeze has really harped on it this week on how important it is and learning from the older guys that it’s a really important game,” Jefferson said.

It’s become equally as important for everybody involved.

“I can’t imagine leaving the program behind and leaving the Egg on that (Mississippi State) side,” Brown said. “It’s just crazy. It means the world for this coaching staff, for Rebel Nation and for these coaches most of all.”