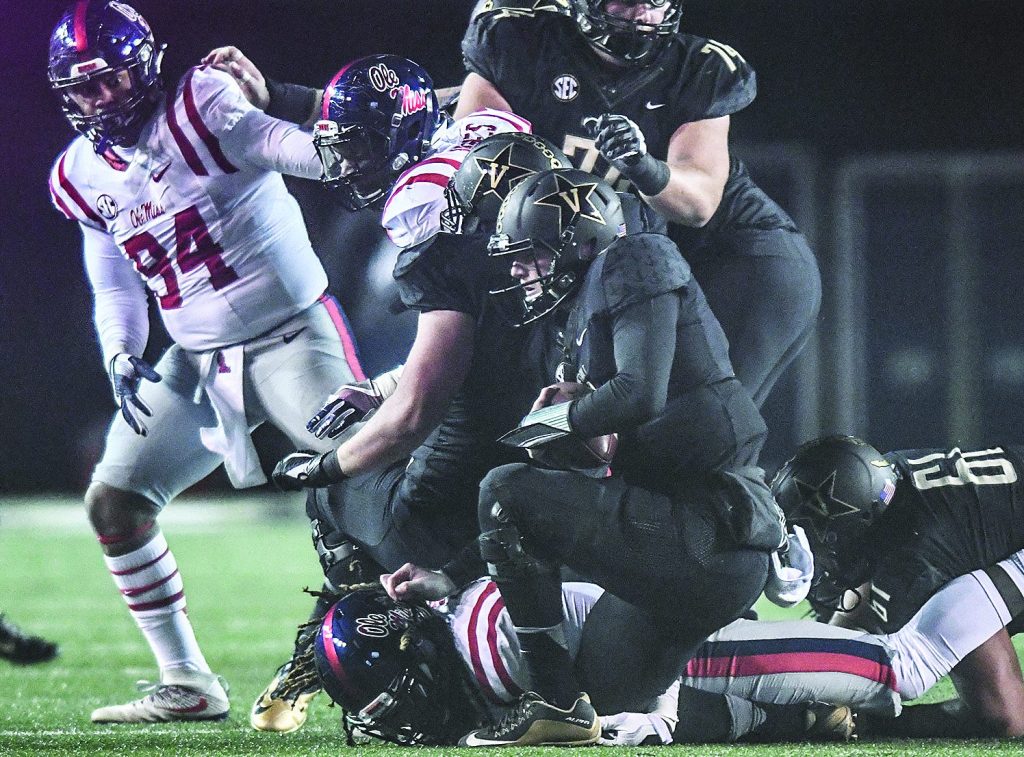 The repetitive mistakes by Ole Miss’ defense have gotten to the point where it’s almost making Dave Wommack sick.

The Rebels’ defensive coordinator said he could barely stomach the game film against Vanderbilt — tape that showed more blown coverages, missed assignments and players routinely being out of position in what was arguably the worst in a season full of poor performances.

“I wanted to throw up,” Wommack said. “I didn’t think we executed well, didn’t get lined up five or six times. I didn’t think the energy was what it usually is with our group. I thought it was embarrassing.”

Vanderbilt is still last in the Southeastern Conference in total offense, but the Commodores piled up the most passing yards, total yards and points they’ve had in an SEC game all season. Ole Miss (5-6, 2-5 Southeastern Conference) also gave up the Commodores’ longest play of the season on a 67-yard pass when Derrick Jones was beaten on a double move in the first quarter.

“Just a lack of communication,” Jones said. “Guys not being disciplined most of the time.”

Miscommunication and misalignments at all levels of the defense have been harped on by Wommack and his players throughout the season, and Wommack said it only got worse when linebacker DeMarquis Gates was ejected early in the second half for targeting.

That means Ole Miss will be without its leading tackler in the first half against Mississippi State (4-7, 2-5) on Saturday (2:30 p.m., SEC Network), but Wommack is more concerned about finding another linebacker in Gates’ absence that can help with a problem that’s lingering into the final game of the season.

“We were trying to get lined up and put ourselves in the best position to do it,” Wommack said. “A couple of times, a couple of defensive linemen just didn’t listen and didn’t get lined up. It’s embarrassing when you don’t get lined up when you’re 11 games into the season. Something is wrong with that.”

Fadol Brown hobbled off the field in the second half without putting much pressure on his right foot, but the senior defensive end showed no signs of hurting Tuesday.

Brown missed four games this season while slowly recovering from offseason foot surgery but has started the last three, collecting 24 tackles in those games. He said he’ll be ready to go again Saturday.

“I’m just here to prove a point, lead this defense and just do everything in my power and just be dominant,” Brown said.

Tight end Evan Engram was not made available to the media this week, a common policy for injured players.

Engram limped off the field in the fourth quarter last week grabbing his hamstring. Head coach Hugh Freeze said Monday the senior would try to give it a go against Mississippi State.