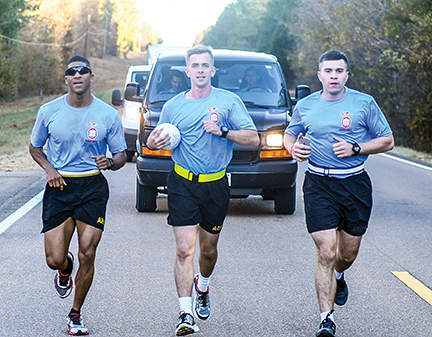 Ole Miss ROTC cadets carry a football on Highway 7 as part of the 4th Egg Bowl Run, near Paris, Miss. on Monday, November 21, 2015. Mississippi State ROTC cadets ran the ball from Starkville before handing it off to Ole Miss cadets, who finished the run to Oxford.

Army ROTC cadets from both universities met in Calhoun City on Monday (Nov. 21) to hand off the Egg Bowl game ball prior to the meeting between the in-state rivals on the gridiron this Saturday. MSU’s cadets ran from Starkville to Calhoun City early that morning. Ole Miss ROTC cadets continued the journey, running 43 miles from Calhoun City to Oxford, where they presented the ball to Ole Miss Head Football Coach Hugh Freeze Monday evening.

“We have the time-honored Egg Bowl rivalry tradition, but at a deeper level, we’re not that different,” said Jonathan Dotson, cadet and senior general engineering major. “Most of us are Mississippians, and we’re all brothers in ROTC. It’s very exciting to be part of something that has grown each year and is becoming a tradition, and it’s exciting to see the community come out and support ROTC.”

The run, which began in 2013, has become a fundraiser for the ROTC activities fund, which allows the program to host events and ceremonies for cadets and offer scholarships. Over the last two years, ROTC has raised more than $10,000. This year, it is asking for help toward its $5,000 goal through the Ignite Ole Miss crowdfunding platform.

“While our cadets from MSU and UM may be cheering for different teams this weekend, they are about to unite onto one team – the Army,” said Lt. Col. Scott Walton, UM professor of military science and leadership. “This run characterizes the cadets’ commitment, dedication and ‘never quit’ attitude. I am proud to have had the opportunity to participate again this year with MSU.”

This year’s Egg Bowl Run has a deeper meaning for the Ole Miss cadets. The ROTC is dedicating the run to Jay Cleveland, a cadet who was killed in a motorcycle accident Nov. 1, in honor of his commitment to the Rebel Battalion.

The run also celebrates 101 years of the U.S. Army ROTC. To honor the milestone, the game ball has been personally autographed by Coach Freeze, and all donors will be entered into a raffle with a chance to win that ball at the conclusion of the fundraising campaign.