Count on a race for the Golden Egg 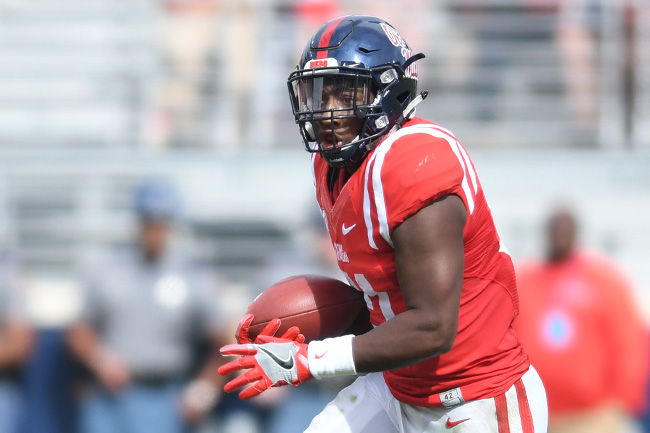 Akeem Judd and the rest of the Rebels’ offense should bounce back this week in an Egg Bowl that has all the makings of a shootout. (Bruce Newman)

Ole Miss and Mississippi State could make history Saturday — and not really the kind you want to be remembered for.

The state’s biggest rivals enter their 89th battle for the Golden Egg on Saturday with little defense of which to speak. Both seemingly hit rock bottom last week when Ole Miss gave up 38 points to Vanderbilt — more than twice as many as the Commodores have scored against any SEC team this season — while Mississippi State allowed that many points before halftime against Arkansas in a 16-point loss despite putting up 42 points of its own.

These teams have been licking their wounds on that side of the ball all season, yet those sore spots have only gotten bigger. If a lack of defense makes you squeamish, you might want to look away.

The Rebels are yielding more than 34 points in SEC games. Mississippi State is worse at 36 points allowed per game with Alabama and Arkansas each dropping 50-plus on the Bulldogs the last two weeks.

Only three times since the turn of the century has the home team not won this game, a good thing for Ole Miss and its offense. Even with freshman Shea Patterson now at the controls, the Rebels still have the SEC’s most prolific passing attack.

Vanderbilt was able to bog the Rebels down a week ago by getting after Patterson and giving him a bunch of different looks, but Mississippi State’s defense isn’t Vanderbilt’s. The Bulldogs will likely want to put pressure on Patterson, too, but it’s a risky proposition if they don’t get to him and leave that porous secondary in one-on-one matchups against Evan Engram and the rest of Ole Miss’ receivers.

But Ole Miss’ defense will have its hands full with Mississippi State quarterback Nick Fitzgerald, who’s just as much of a threat with his legs as he is his arm. The 6-foot-5, 230-pounder is just 15 rushing yards away from 1,000 for the season and is tied for the SEC lead with 12 rushing touchdowns after piling up four more last week against Arkansas.

The Rebels have to be disciplined enough with their eyes to be in the right position to make plays against Fitzgerald when the Bulldogs go to the read option, but Ole Miss has rarely shown the ability to do any of that, allowing at least 200 yards rushing in all but one SEC game this season. And there’s always that big pass play or two the Rebels will give up sooner or later.

In case you’re wondering, the most points ever scored in an Egg Bowl came in Ole Miss’ 45-30 win in 2000. Vegas is expecting that to be threatened this year with the over/under set at 69.5, according to VegasInsider.com (the Rebels are also a 7.5-point favorite if you’re into that kind of thing).

I’m not a betting man, but I were, I’d take the over and feel pretty good about it.

If you like offense, this is your game. And it may produce more of it than ever before that Egg Bowl trophy is hoisted.