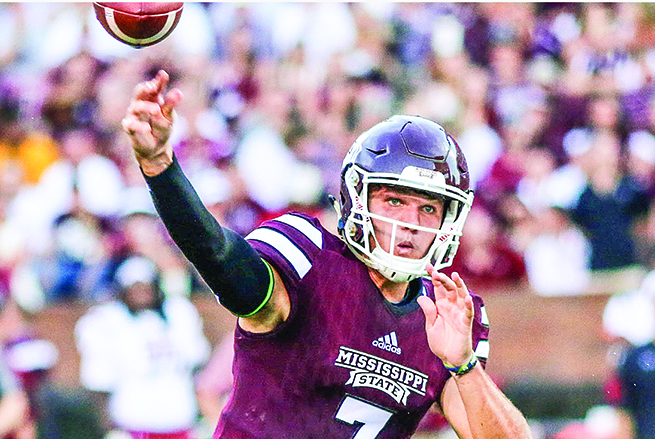 Mississippi State’s big-bodied, mobile quarterback is once again proving to be a handful.

Dak Prescott left his mark as the best quarterback in school history before heading to the NFL, where he’s the runaway favorite for Offensive Rookie of the Year with the Dallas Cowboys. His departure left a huge question mark behind center, but the Bulldogs have found an affirmative answer in Nick Fitzgerald, who enters Saturday’s Egg Bowl (2:30 p.m., SEC Network) as one of the nation’s top dual-threat signal callers.

“I think he has gotten better as the season has gone along,” Ole Miss defensive coordinator Dave Wommack said.

Fitzgerald has thrown for twice as many touchdowns (21) as interceptions (10), but the likeness to his predecessor comes with his heavy feet. The 6-foot-5, 230-pounder leads the Bulldogs with 985 rushing yards and is tied for the Southeastern Conference lead with 12 rushing touchdowns. His three 300-yard passing, 100-yard rushing games are tops in the nation.

Like Ole Miss, the Bulldogs (4-7, 2-5 Southeastern Conference) have needed every bit of Fitzgerald’s production to stay close in games with Mississippi State giving up the most points and passing yards in the SEC. The sophomore accounted for 459 yards of offense and six touchdowns against Arkansas last week — a game the Bulldogs lost 58-42.

Mississippi State is averaging 512.5 yards over its last four games.

“We have to win first down against a guy like (Fitzgerald),” Ole Miss coach Hugh Freeze said. “I think that’s a critical stat to follow in this game, being able to win that down and get them into third and long. If you’re always worried about if it’s either run or pass, it can be difficult.”

That’s easier said than done for an Ole Miss defense that hasn’t been much better, particularly when it comes to stopping the run. The Rebels have allowed at least 200 rushing yards eight times this season with the inability to get in the right spots and make tackles the crux of their issues.

The Bulldogs’ run-first spread offense will test Ole Miss’ discipline with the zone read, where Fitzgerald has the option to hand the ball off to his running back or keep it by “reading” whether backside defenders stay with him or crash inside. Assignment breakdowns could lead to more big gainers for Fitzgerald, who leads the league with 36 runs of at least 10 yards.

“With the run reads and everything, you really don’t know who the quarterback is giving the ball to or is he going to keep it?” safety Tony Conner said. “It just comes back to alignment and assignment, eye discipline. You’ve just got to read your cues right.”

Said defensive end Fadol Brown, “We’ve got to rush as a unit and just keep him bottled up and try to hit him as much as possible.”

Wommack said many of the alignment issues against Vanderbilt came in the second half when linebacker DeMarquis Gates was ejected for targeting. Ole Miss’ leading tackler will also miss the first half Saturday, leaving it up the rest of the linebacking corps to handle the communication until Gates returns.

“We will get them playing the best they can and hopefully get them schemed up the right way and give them a chance to be successful,” Wommack said.

But the matchups don’t favor either defense, making it imperative, Freeze said, for Ole Miss’ offense to match whatever Fitzgerald and the Bulldogs produce.

“We’ve got to be sure that we’re scoring touchdowns in the red zone when we get those opportunities because it seems, as you watch them and you watch us, that it could easily be who scores the most touchdowns,” Freeze said. “I hope that’s not necessarily the case on our part, but when you look at it realistically, the things they do, they have a good scheme.”