Lafayette set for North Half title clash with Pontotoc 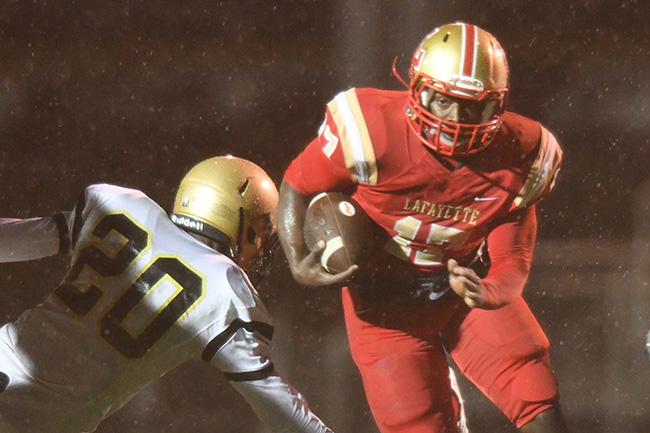 Running back Jamarcus Quarles (17) and the rest of the Commodores will play for their first MHSAA Class 4A championship game berth since 2013 when Pontotoc visits William L. Buford Stadium on Friday. (Bruce Newman)

When Michael Fair took over as Lafayette’s head football coach in the spring, he knew he had the pieces to potentially be a successful team. He did not know how successful or special this could be, though.

On Friday night, Lafayette has the opportunity to make their first MHSAA Class 4A state championship since 2013 when they host Pontotoc in the North Half championship at William L. Buford Stadium (7 p.m., 105.1 FM).

It will be the fourth straight playoff game at home for the Commodores (11-2) this season as they have not had to leave Oxford since their regular-season finale at Byhalia on Oct. 28.

“To still be playing the week of Thanksgiving, a lot of things have to go right throughout the season and they have,” Fair said. “We knew we had pieces in place to have a really good football team, but I don’t know if anybody quite expected what’s going on here, especially after those first two weeks.”

After two close losses to Horn Lake and Grenada to start the year, Lafayette began an 11-game winning streak, which they are still riding heading into Friday’s game with Pontotoc (13-1). The Commodores defeated Shannon, Louisville and Amory on their road to the state semifinal. The Warriors have dispensed of Ripley, Greenwood and the defending 4A state champions in Noxubee County to earn a berth into the semifinals.

Much like Lafayette, Pontotoc has known only winning this season as they started the season on a seven-game winning streak before falling to eventual Region 1-4A champion Amory on Oct. 7. They then began their current six-game winning streak the following week.

As has been the case for Lafayette throughout the playoffs, they face an opponent who is very balanced on offense. The Warriors have thrown for nearly 2,900 yards with senior quarterback Jacob Carter throwing for 2,745 yards and 32 touchdowns this season. Pontotoc’s ground game is just as successful, rushing for nearly 3,000 yards. Sophomore Gabe Harmon has 267 carries for 1,856 yards and 21 touchdowns. Harmon as recorded 11 100-yard plus games this season.

“Pontotoc’s got a great team, and it’s going to be an exciting atmosphere with two close towns,” Fair said. “(Pontotoc) has been hot. We focus on ourselves, but you can’t help but pick up the newspaper and read about those guys and the special year they’re having. … A solid football team. A senior-laden team that’s well coached. They don’t give up big plays, and they don’t make mistakes that beat themselves.”

The winner will get either Florence or Poplarville out of the South in the state championship game on Dec. 3 at Davis Wade Stadium on the campus of Mississippi State University.