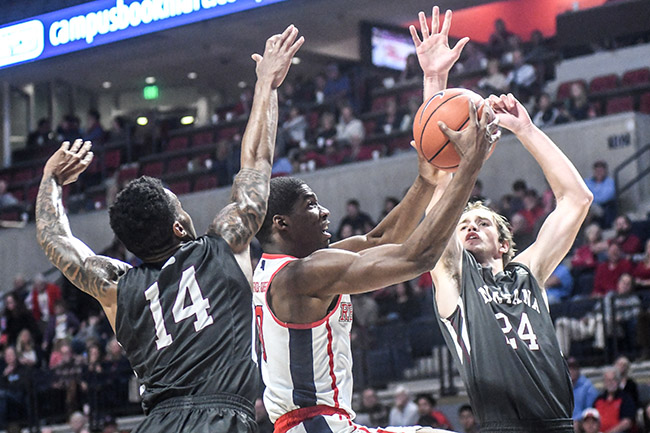 Deandre Burnett, Cullen Neal and Sebastian Saiz paced the Rebels in an 86-81 win over Montana on Thursday at the Pavilion. The Rebels (5-1) led by as many as 18 midway through the second half and held on from there.

Burnett led all scorers with 21 points. Neal had 19 points and four assists while Saiz recorded his 12th career double-double with 17 points and 13 rebounds. Terence Davis gave the Rebels 18 points and five rebounds in 24 minutes off the bench, going 6 of 9 from the field and 3 of 4 from 3-point range.

Davis and Neal each had 11 points in the first half to help Ole Miss build a 41-29 lead at the break despite getting just one basket from Burnett, who averaged more than 25 a game in the Paradise Jam over the weekend. Burnett eventually heated up, scoring 19 points in the Rebels’ 52-point second half to help Ole Miss fend off a late surge by Montana that saw the Grizzlies (1-4) cut the deficit to five with 51 seconds remaining.

Burnett finished just 5 of 14 from the floor and 2 of 7 from beyond the arc but went 9 of 11 from the free-throw line, including three in the final minute. The Rebels finished just 19 of 28 on free throws, but their final 10 points came from the charity stripe in the final 2 minutes to keep Montana from getting any closer.