Watch out for deer on roadways 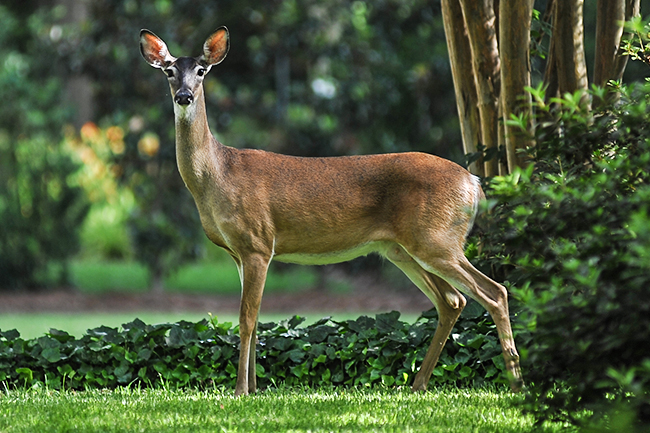 As the weather turns colder, drivers need to take extra precautions while traveling during the evening and early morning hours to avoid deer that become increasingly more active during November and December.

While most drivers expect to see deer along country roads, driving inside the Oxford city limits can also pose a threat as the deer population increases.

“We’ve had a few wrecks so far this year,” said Oxford Police Chief Joey East. “But now that hunters are out there pushing them out, you’ll see them coming out more often. They’re usually most active just after dusk and around dawn.”

If you do hit and kill a deer, contact the police to have it disposed, East said.

Most streets inside the city of Oxford have a low enough speed limit that avoiding a deer is a bit easier than when traveling at 60-plus miles per hour like on local highways.

The Mississippi Department of Transportation is asking all drivers to take extra precautions while driving on highways at night.

MDOT advises motorists watch for deer and drive with extreme caution, especially in posted areas. If you see one deer near the road, slow down and expect that other deer will follow. At night, use high-beam lights when no traffic is approaching. The high beams will illuminate the eyes of deer on or near the highway, and of course, buckle up to avoid serious injury should a collision occur.

“The best thing people can do is slow down,” East said.

“Most of the wrecks involving deputy vehicles are because of deer,” he said.

Despite slowing down and keeping your eyes on the road, sometimes a collision is just unavoidable and Mills suggests bracing yourself for the impact, rather than trying to swerve to avoid the deer.

“People don’t want to hurt them, but when you jerk your car, that’s when you can roll over or drive into a ditch,” he said. “It’s better to take the impact than run off the road or roll over. When people try to avoid hitting them, they can sometimes get into a worse wreck than if they hit the deer.”

While using high beams on dark, country roads can further blind and confuse deer, Mills said they can also help see deer and give the driver more time to slow down.

“You can see further ahead and see their eyes to give you more time to slow down,” he said.

Several products are on the market that may help deter deer like car-mounted whistles. However, drivers should not rely on them and remain cautious while traveling at night during cooler weather.

For the last several years, the city of Oxford has been trying to reduce the number of deer inside the city limits using certified archers to control the population.

In 2009, Oxford officials began working with the U.S. Department of Agriculture and the Mississippi Department of Wildlife and Fisheries to help establish the management program that utilizes bow hunters who go onto private property — with permission only — to hunt deer, particularly does, to help reduce the growing number of deer.

The hunting program involves using trained and certified crossbow hunters to hunt does and bucks during the regular hunting season inside the city limits. Hunting with guns is illegal inside the city.

Homeowners must request and give permission to have a hunter placed on the property during hunting season.

There are 36 licensed hunters taking part of the program this year, according to Jimmy Allgood, who heads up the program for the city and is also the emergency management coordinator.

Allgood said homeowners can apply for a hunter throughout the year. The application is online on the city’s website.

The complete deer management program is available online, as well as applications for the homeowners to apply for the hunting program at www.oxfordms.net. For more information, call Allgood at 816-7469.