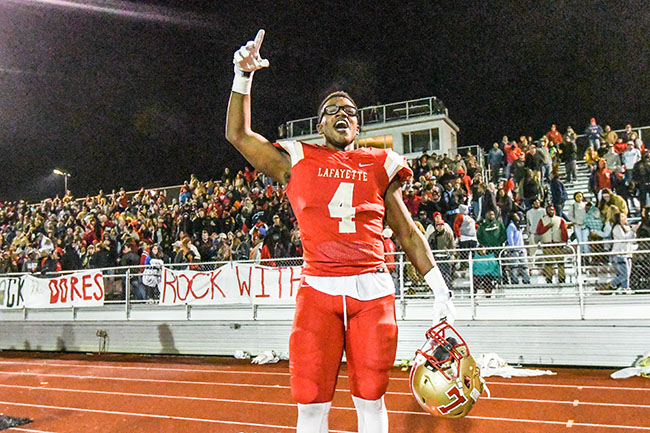 Lafayette’s special season will continue for another week. After three straight weeks of what could be viewed as non-competitive playoff football, the Commodores were tested as the Ponotoc Warriors gave them all they could handle. Lafayette proved to have just a little bit more as they defeated Pontotoc 21-14 in the MHSAA Class 4A north half championship at William L. Buford Stadium on Friday night.

The win, which was Lafayette’s 12th straight, sends the Commodores into next week’s 4A state championship game against Poplarville at Davis Wade Stadium in Starkville at 3 p.m. next Saturday. Poplarville defeated Florence 42-14 to claim the 4A south half title.

“You’re not playing at this time of the year if you’re not a really good football team,” Lafayette head coach Michael Fair said. “Pontotoc, they hung in there and they played great, defensively. Our guys just never quit. It’s been the same thing all year. We’ve been behind before and never panicked. We just go back to work and find a way to win.”

Fair is in his first year at Lafayette after leaving Senatobia to replace former head coach Eric Robertson and has led the Commoodores (12-2) to their first state championship appearance since 2013.

It was a little bit of a feeling out process for both teams as the first four possessions of the game resulted in punts and a scoreless first quarter. On Lafayette’s third drive, running back Jamie Shaw broke the scoreless tie with a 15-yard run to give Lafayette the 7-0 lead  with 11:35 left in the half. It was a short lived lead as Pontotoc (13-2) knotted things back up after linebacker Hayden Harris intercepted an errant throw from quarterback Will Ard, taking it 45 yards for the touchdown with a little less than eight minutes left in the first half.

“We were running four verticals and I was trying to see a guy bend in between two safeties and Hayden is a good player and he drove under it,” Ard said of the play. “We picked it back up.”

Ard, who transfered from Pontotoc two years ago, finished 12 of 19 for 135 yards and one interception against his former team.

After a 7-7 tie heading into halftime, Pontotoc was the first to score in the second half off a 26-yard pass from quarterback Jacob Carter to receiver Daryl Dilworth for the 14-7 lead in the third quarter. Lafayette responded the very next possession with a 44-yard, eight-play drive that was capped by running back Jamarcus Quarles on a four-yard run.

Quarles and Shaw combined for 78 yards on 29 carries for three touchdowns.

It remained tied heading into the final quarter after Carter missed a 29-yard field goal attempt wide right, giving Lafayette the ball back and the score preserved at 14-14 with a 1:14 left in the third.

The star player of the night would be Lafayette’s Dillon Woods. The senior came up big on both sides of the ball for the Commodores throughout the night. After the missed field goal by Pontotoc, Lafayette was staring at a 3 & 3 at their own 27 when they ran reverse with Quarles handing the ball back to Woods for a 32 yard pickup and a fresh set of downs. Lafayette did not score on that drive and the score remained tied, until Woods made his presence felt on defense as he picked off an errant throw by Carter for a 34-yard return to the Pontotoc two yard-line. Shaw would score the next play for the game-winning score.

“What a great player,” Fair said of Woods. “He’s just a senior that’s been there and done that. He’s a lot of fun to coach.”

Wood’s night ended during Pontotoc’s final drive as he was injured and came out of the game for the final play. Lafayette would sack Carter on 4th and Goal at the Commodore five yard-line to seal the victory.

The stakes were high and the play-calling by both teams on third and fourth downs backed that up. Lafayette was 5 of 15 on third downs and converted three of their nine fourth down attempts, including one fake punt where Tay Reed ran it three yards to keep the Commodore’s opening drive alive. An unsuccessful attempt came on a 4 & Goal at the Pontotoc one yard-line and Quarles was unable to score, resulting in one of their two turnover on downs of the night.