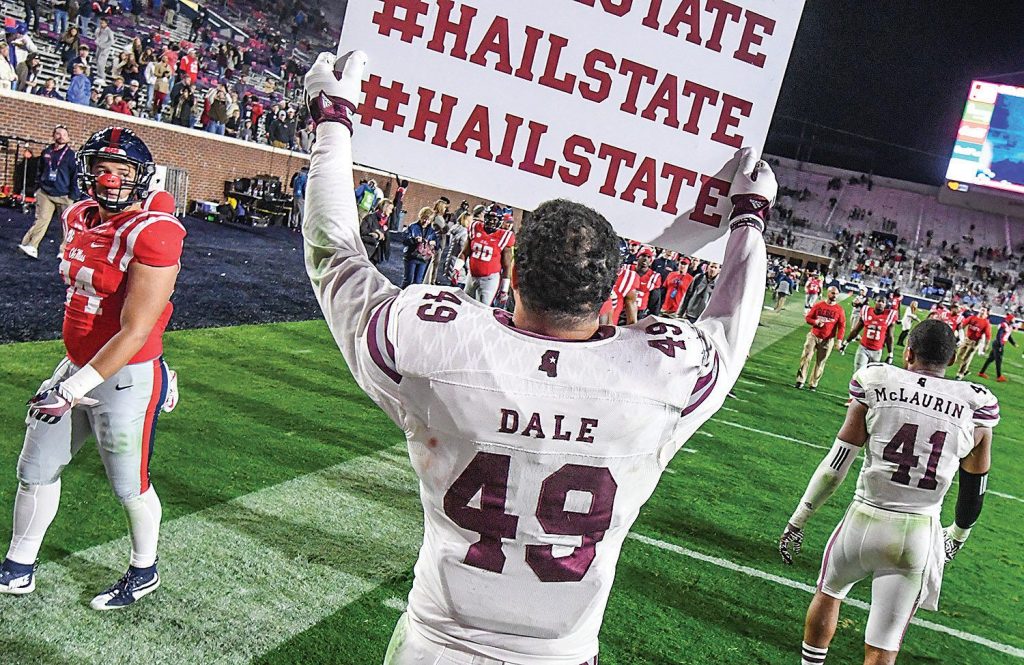 If Vanderbilt was ugly, Ole Miss’ showing against its arch nemesis was downright hideous. Hugh Freeze talked leading up to this year’s Egg Bowl about the need to score touchdowns at all times when you’re trotting a defense out there as bad as the Rebels’ was all season, so you could see the writing on the wall as soon as the Rebels didn’t do that on their first-half trips to the red zone.

A failed fourth down early in the third quarter on another trip inside the Bulldogs’ 20 — because the Rebels really didn’t have another choice — started the second-half avalanche that was 28-0 Mississippi State in the final two quarters and capped a dismal season for the Rebels with a 55-20 loss Saturday that hasn’t been this bad in the rivalry series since Woodrow Wilson was in office.

It brought a screeching halt to a 5-7 showing in Freeze’s fifth year at the helm, one that comes less than a year after that 10-win, Sugar-Bowl high. What Ole Miss’ head coach does before his sixth year rolls around may very well determine how his tenure in Oxford is remembered.

“We’ve got to look at everyone and everybody,” Freeze said after the loss.

I used this space last week to hit on how and why the defense got to this point — beginning Saturday with the nation’s 113th-ranked run defense and being among the nation’s worst in many other categories just two years after having the nation’s best scoring defense — but now the Rebels have to address it. The process has started with the school announcing defensive coordinator Dave Wommack’s resignation (something he said he decided he was going to do two years ago), but Freeze has to nail down the following, according to what he said afterward: someone who can recruit better players (linebackers, defensive backs and pass rushers specifically) and someone who can instill toughness and accountability in them once they get on campus.

Coaches usually get one shot to get this kind of hire right, but Freeze’s search for Wommack’s replacement is twice as hard because who can he realistically lure to Oxford with this NCAA cloud hovering over the program? The rollercoaster probe won’t end until sometime next year and could have a number of different outcomes once it does. Can he find the kind of coordinator he needs with that kind of uncertainty?

The offense isn’t void of blame here, something Freeze also acknowledged. The running game under Freeze has been a running problem and entered Saturday’s game 12th in the SEC and averaging a tenure-worst 4.1 yards a carry under Freeze. Freeze’s system won’t ever be confused for a behemoth on the ground, but the lack of a go-to back that defenses have to consistently account for makes Ole Miss’ offense incredibly predictable as games wear on (like getting blanked 28-0 in the second half against a Mississippi State defense that owns the league’s worst pass defense).

“We were bad on defense all year, but offensively we declined,” Freeze said. “We lost some really good experienced players, but we’ve got take a look on that side also.”

There’s a lot of things Freeze has to get right after Ole Miss’ flaws were exposed with each passing week in a season that began with players really believing they could compete for an SEC championship yet ended in November.

The last step for Ole Miss to take under Freeze is to get to Atlanta as the SEC West’s representative, and Alabama isn’t getting any worse. If Freeze gets it right, that kind of talk will be more realistic than it was this year. If not, Ole Miss doesn’t have a chance.

“I’m glad the season’s over now,” Freeze said. “It’s been difficult, and I can’t wait to hit the road recruiting and get the necessary changes made and get to spring ball.”

Freeze’s tenure may depend on it.