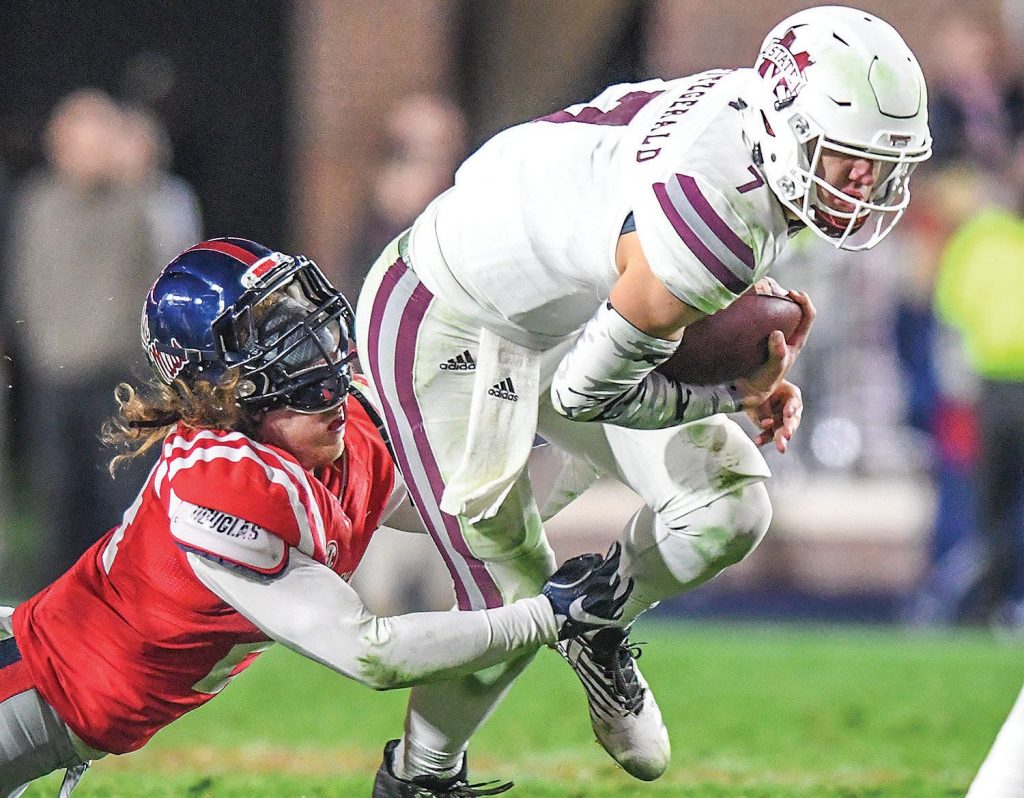 It was a fitting ending.

On a day when Ole Miss defensive coordinator Dave Wommack announced his retirement, the Rebels had one of their worst performances on that side of the ball in a season full of them Saturday in a 55-20 loss to Mississippi State in front of a sellout crowd of 66,038 at Vaught-Hemingway Stadium. It’s the first Egg Bowl win since 2013 for the Bulldogs, who assured Ole Miss of its first losing season under head coach Hugh Freeze.

“I don’t think nobody thought (we wouldn’t go to a bowl),” running back Akeem Judd said. “Everybody worked hard and planned to go play for an SEC championship and a national championship. But that’s just how football is. You can’t really predict anything.”

The teams combined for 1,094 yards against two of the Southeastern Conference’s worst defenses with Ole Miss (5-7, 2-6 Southeastern Conference) falling behind 27-10 early in the second quarter and never catching up. The Rebels gave up season-highs in points and rushing yards (457) in their worst regular-season loss since a 66-31 loss to Texas in 2012 — Freeze’s first year.

“Kind of felt like it was going to be a scoring fest, and we didn’t keep up with the scoring,” Freeze said.

Mississippi State quarterback Nick Fitzgerald threw for 109 yards and three touchdowns but did most of his damage with his legs against the nation’s 113th-ranked rush defense. The SEC’s seventh-leading rusher ripped off a 70-yard run to set up the Bulldogs’ go-ahead touchdown late in the first quarter, broke free for a 61-yard score in the third and finished with a career-high 258 yards and two scores on just 14 carries.

“They just did a basic quarterback power, which we knew they were going to do,” defensive end Marquis Haynes said. “Just a couple of (missed assignments) on those plays that hurt us.”

Ole Miss’ Shea Patterson went 27 of 48 for 320 yards with two touchdowns and two interceptions against the league’s worst pass defense in his third career start. Damore’ea Stringfellow caught both touchdowns while Akeem Judd ran for 107 yards, but things quickly got away from Ole Miss after it had to settle for a pair of Gary Wunderlich field goals on two first-half trips to the red zone and turned the ball over on downs when Judd lost a yard on fourth down at Mississippi State’s 17-yard line in a 27-20 game early in the third quarter.

The Rebels were outscored 28-0 in the second half.

“I thought the energy in the whole place kind of went down for sure,” Freeze said of the failed fourth down. “There was good energy there at the beginning of the second half on the sideline and in the stadium. There’s no question that was a crucial play.”

The teams combined for 675 of their yards by halftime. Mississippi State had 250 rushing yards in the first two quarters and scored four consecutive touchdowns to build its 17-point lead after Fitzgerald’s second touchdown pass with 9:13 left in the second quarter, setting the tone for Ole Miss’ worst Egg Bowl loss since a 36-0 shutout in 1916.

“It’s not the way you want to end the season,” Freeze said. “I’ve been in five of these, and I hate the feeling in the two losses that we had. … Very disappointing night.”