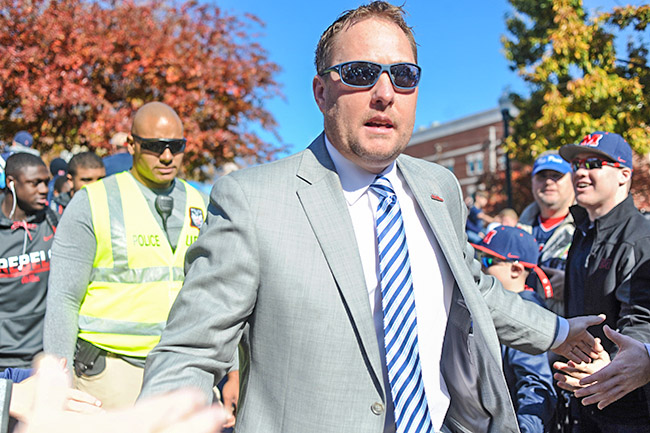 Ole Miss head coach Hugh Freeze leads the team on its walk to the stadium for the game against Mississippi State, in Oxford, Miss. on Saturday, November 26, 2016. (Jackson Newman, Oxford Eagle via AP)

Hugh Freeze doesn’t know yet who will be calling Ole Miss’ defense next season, but the Rebels’ coach knows what he’s looking for in whoever it ends up being.

Ole Miss is in the market for a defensive coordinator after the school announced before Saturday’s Egg Bowl that Dave Wommack would be retiring at the end of the season, which came with a 55-20 loss to Mississippi State. Freeze said he’s “not far along” in his search for Wommack’s successor but has a specific list of criteria candidates have to meet as he sets out to replace the only defensive coordinator he’s had during his five-year tenure.

“A toughness that he’ll bring to our kids, energy, and obviously they’ve got to fit with our core values and who we are,” Freeze said. “I’d love for him to be a great mentor of young men, but really toughness and physicality defensively and that he demands that energy and that work every day.”

The Rebels gave up season-highs in points and rushing yards (457) in Mississippi State’s largest margin of victory in the Egg Bowl since 1916, capping Ole Miss’ worst defensive season in Freeze’s tenure. Ole Miss is 95th nationally in sacks, 100th in scoring defense, 110th in total defense, 120th in rush defense and 125th in red-zone defense.

“We were not good,” Freeze said. “When you can’t stop (the offense’s) base stuff, we’ve got to figure out is it process? Is it people? What exactly is it?”

A coordinator who can immediately upgrade a talent level that’s dramatically regressed since the Rebels had the nation’s top scoring defense two seasons ago is also needed.

Safeties Myles Hartsfield and Deontay Anderson along with defensive tackle Benito Jones came on late as freshman starters, but Ole Miss hasn’t signed any four-star linebacker prospects since Freeze was hired, according to 247Sports’ composite ratings, and will lose Rommel Mageo, who started the final four games at middle linebacker in his final season of eligibility. The Rebels don’t have a proven pass rusher outside of Marquis Haynes (team-high seven sacks), who could elect to skip his senior season and get his professional career started early.

“We’ve got a lot of young kids over there that I think have the potential to be good,” Freeze said. “We’ve got some good ones that we redshirted, but we’ve got to go recruit better and then we’ve got to do an exhaustive study of our staff and system.”

Freeze didn’t put a timetable on his search, but players are eager to find out exactly what all the change looks like.

“It’s going to be real interesting to see how next year goes without Coach Wommack being here,” Haynes said. “Real interesting. Just what type of defense we’re going to start running, is the defensive front going to change, how they are going to utilize me and (defensive end) Vic (Evans), the whole d line and the linebackers and stuff.”