At UM, classes fill up quickly 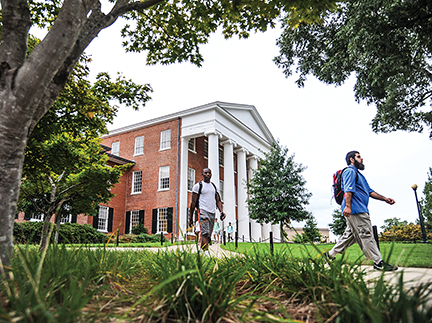 Ole Miss students walk on campus as classes got underway for the fall semester in August. Competition for courses is stiff due to the increase in the number of students at Ole Miss.

During college orientation, students are required to sit at a computer and select the courses they are going to take during the upcoming semester, essentially competing against other students for an open spot in their chosen classes.

As a result, some students may not be able to get into the class of their choosing because classes are often quickly filled to maximum capacity.

Enrollment continues to grow each year at University of Mississippi, resulting in more students on campus. That can mean more competition for course enrollment.

Texas native Kylie Smith said she thinks university growth has affected her ability to secure spots in her required courses.

“Picking classes for my schedule is always stressful for me,” Smith said. “The [classes] reach max capacity and close in an instant, and I am forced to take a night class or just wait until the next semester.”

The increasing number of students means the university must open up more classes and provide more teachers.

“I think the reason [classes] fill up so fast is that there are too many students on campus and not enough teachers,” Smith said. “They try to bring in more teachers and classrooms, but it just isn’t keeping up with the rate of increasing students, which is causing students like me to stress about getting into the course I’m supposed to take.”

UM student Colby Gaddis has been an Ole Miss fan his entire life and made numerous trips to Oxford prior to college.

“There never used to be this many people in Oxford,” Gaddis said. “The growth of the university can be seen by just driving around campus. I work on the Square, so I see many more students than I used to see growing up and visiting the Square.”

“It is frustrating because I know the university is aware of its growth.”

“Campus advising is a big problem here at Ole Miss,” said Carr. “The counselors are overloaded with the amount of students. Some of them do not provide enough help that the students need. You have an SEC school with thousands of students and only a handful of academic advisers.”

Carr believes the lack of advising information leads to the lack of knowledge about how to select courses needed to take to graduate in the four-year college plan. With these classes reaching max capacity and the lack of advisers, students are left with unanswered questions and inconvenient schedules.

Maddy Ewing, a Dallas native, also hopes for a solution to this problem.

“I know several people who had to be a part-time student or take a semester off because they could not get into a class,” Ewing said. “I would be devastated if I had to transfer or take time off because of the competition to enroll in classes at Ole Miss.”

Ewing said she hopes the university realizes there are tons of students who are trying to graduate in a timely manner.

“Even though some people are late to register for class, I think it is important to make sure each student has the opportunity to enroll in the class they desire,” she said. “Whether it be by hiring more teachers and advisers, or building more classrooms, something must be done.”