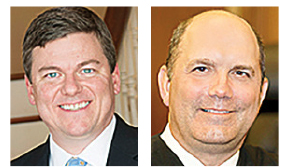 North Mississippi voters are headed back to the polls Tuesday to decide among two Mississippi Supreme Court candidates.

Out of four candidates in the Mississippi Supreme Court District 3 Place 1 seat race on Nov. 8, none of them earned more than 50 percent of the vote, leaving the top two contenders – Columbus attorney John Brady and 17th District Circuit Court Judge Robert “Bobby” Chamberlin – to battle it out Tuesday in a runoff election.

The seat is being vacated by Justice Ann Lamar, who is retiring after serving 10 years on the court.

Each justice elected to the court serves an eight-year term. Mississippi holds no primary election for judicial candidates. The election is nonpartisan.

The 33-county Northern District stretches from Columbus, Kosciusko and Greenwood to the Tennessee state line.

Brady is a Columbus business attorney who has represented small and large businesses and their employees, as well as governmental entities, law enforcement and those in the medical profession for more than two decades. He is a shareholder in the Columbus office of Mitchell, McNutt & Sams law firm.

He’s served on the Mississippi Bar Executive Committee, as part president for the Mississippi Defense Lawyers Association and Lowndes County Bar Association. Brady and his wife, Jennifer, who is originally from DeSoto County, have two daughters, Rachel and Hannah.

Chamberlin,of Hernando, is currently a judge for the 17th Judicial District of Mississippi. He was re-elected after running unopposed on Nov. 4, 2014, for a term that begins in 2015 and will expire in 2018. He has been a judge in a circuit including DeSoto, Panola, Tallahatchie, Tate and Yalobusha counties since 2004. Before that, he was a Republican state senator representing DeSoto County from 2000 to 2004 and a municipal judge in Hernando.

Chamberlin received his Bachelor’s of Arts degree and his law degree from the University of Mississippi Law School. He was admitted to the bar in 1990.

He and his wife, Kim have a son, William.