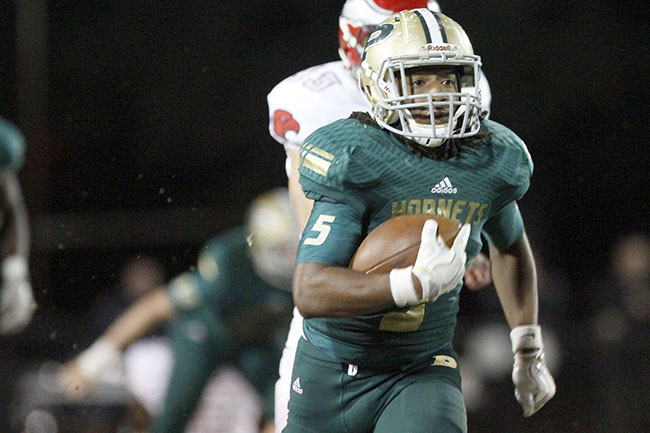 Poplarville running back Austin Bolton scores a touchdown on his first carry against Florence during 4A South State title game in Poplarville, Friday, Nov. 25, 2016.

The wing-T offense. An offensive scheme rarely seen in high school football but poses multiple threats to a defense when executed successfully. That is all that is in the way of Lafayette and their first state championship in five years. The Commodores (12-2) and Poplarville will meet for the MHSAA Class 4A championship at Davis-Wade Stadium on the Mississippi State University campus in Starkville on Saturday (3 p.m., 105.1 FM).

Lafayette defeated Pontotoc 21-14 in the North Half championship while Poplarville sent Florence home with a 42-14 victory in the South Half title game last week.

Poplarville, and head coach Jay Beech, has made a living out of the wing-T offense this season, leading them to a 12-1 overall record and a Region 7-4A championship with a perfect 5-0 record.

“We’re by the book basically,” Beech said of his use of the wing-T offense. “We believe in it. We love it, and our kids buy into it. It’s what got us here.”

The scheme has produced a lot of points and a lot of yards for Poplarville this season. The Hornets are averaging 42.3 points per game and 49.5 points a game during their postseason run. The offense is built around a successful ground game, which Poplarville indeed has. The Hornets have two players with more than 1,500 rushing yards this season. Junior running back Austin Bolton has 1,701 yards and 21 touchdowns on 179 carries while senior fullback Jesse Pernell has 1,614 yards and 26 touchdowns on 189 carries. Poplarville has rushed for nearly 5,000 yards with 4,934 and have four other players combining for 1,468 yards and 16 touchdowns.

With such a successful ground game, Poplarville does not have to throw it much, but sophomore Antonio Brown has been reliable when called upon. Brown has completed 42 of 78 passes for 856 yards and 12 touchdowns. He has thrown four interceptions this season.

“We don’t see that much in north Mississippi at all,” Lafayette head coach Michael Fair said of the wing-T offense. “Not only do they run it, but they’re really, really good at it. They’ve got a couple running backs that really run. They’re one of those teams that’s a lot of fun to watch unless you’re preparing for them.”

Beech, who is in his third year as the Poplarville head coach, has been with the Hornets for six years totals and witnessed the rise of a team that has put everything together this season, suffering their only loss the first game of the season to Saint Martin and hasn’t lost since.

Reaching the state championship game for the first time in school history is a culmination of what Beech views as the past several seasons and a senior-laden team learning from past postseason experiences. The Hornets reached the second round last year and the third round in 2014 before being eliminated by St. Stanislaus (‘15) and Purvis (‘14).