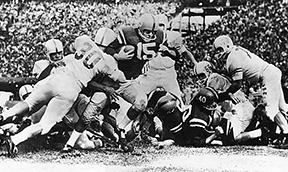 In 1971, when coach Johnny Vaught penned his book “Rebel Coach,” he still had something on his mind that had bothered him greatly back on New Year’s Day 1958. He could not let it pass again without mentioning to his readers.

The incident happened when Ole Miss was getting ready to play Texas in the 1958 Sugar Bowl. Ole Miss had played in the bowl two other times but was beaten by Navy in 1955 (21-0) and by Georgia Tech in 1953 (24-7). They were not going to let it happen for the third time.

Texas head coach Darrell Royal must have wanted to beat Ole Miss so bad he would step over “conference ties and ethics,” as coach Vaught put it. Royal and the Mississippi State head coach, Wade Walker, reached an agreement that allowed State assistant coach Leonard McCullough to go to Austin and help Texas players and coaches get ready for their meeting with Ole Miss in New Orleans.

Coach Vaught stated, “I am a strong believer in the Southeastern Conference. When a SEC team plays a school from another conference, I want our team to win — and that includes Mississippi State.”

He went on to state firmly, “In our last game of 1957, State tied us 7-7, and while we were preparing for Texas, Coach Wade Walker of State let an assistant, Leonard McCullough, go to Austin to help Royal and his team prepare for us. I don’t like that sort of thing.”

Coach Vaught ended this reference in his book by stating, “Actually, I don’t think the results were complimentary to State.” He had that right on two fronts — we beat Texas 39-7 in the 1958 Sugar Bowl.

The next-to-last game in the 1957 regular season was a matchup with Tennessee in Memphis. We still had State to play the next weekend. The representatives of the Sugar, Cotton, and Gator bowls were at the game.

Before that start of the game, the Sugar Bowl rep asked Ole Miss to commit to playing Texas on New Year’s Day, 1958. The team and coaches agreed and then went on to beat Tennessee 14-7.

We tied State the next weekend and then started to prepare for Texas. Vaught said the boys on his team decided “the school  been embarrassed enough. Texas fell 39-7.”

The Hickerson brothers, Willie and Gene, along with Jackie Simpson, made the big defensive plays came from Bobby Franklin and Ray Brown alternated at quarterback to keep Texas off guard. By the fourth quarter, the Rebels had Texas down 26-0.

Texas was able to get on the board and then the Longhorns recovered a fumble and were set to cut the lead by more that half. Brown then intercepted a pass at the Rebel 7-yard line and next came a part of Ole Miss football history.

After three downs of getting nowhere, Brown dropped back to kick from his own end zone. It was a high snap and Brown hesitated after he caught the ball. He looked up and saw a Longhorn tackle coming straight at him. He then slid to his left and found daylight. So he took off from inside his own end zone.

Brown had the blockers and the speed. After getting to the 40-yard line, it was clear sailing for him and his blockers, one of whom was All-American guard Jackie Simpson. Simpson had been a high school fullback and was yelling to Brown: “Lateral! Lateral! Throw me the ball! Damn it, let me score just once!”

Brown had a right to be tired. He played both sides of the ball, and before that great run he had intercepted two passes, threw for a touchdown and ran for another. He was selected MVP of the game and to this day he had been the only MVP player who was elected by a unanimous vote of the sportswriters.