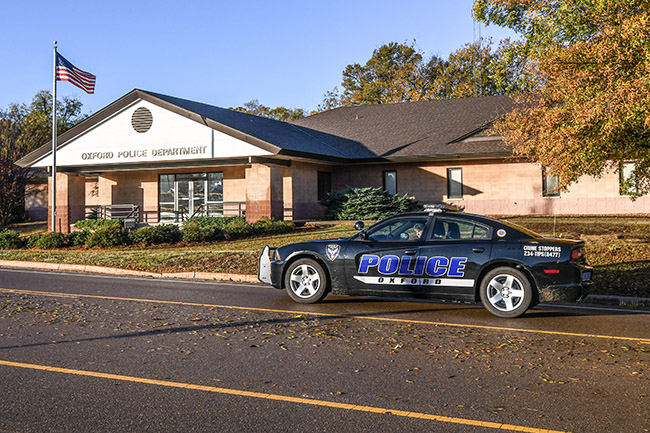 The Oxford Police Department is located on Molly Barr Road in Oxford, Miss. on Tuesday, November 29, 2016.

Now, the OPD is just about busting at the seems.

East presented updated photos and data Monday to the Oxford Board of Aldermen, showing how OPD has run out of space.

“I know there are other departments dealing with the same thing,” East said. “But I just wanted to update you on our situation.”

East said the evidence and file rooms are completely full. There are five investigators working out of one 20-foot by 20-foot room.

“Every place you look there’s stuff in it,” East said.

The mayor and aldermen have discussed building a new municipal center in the future, which would be a new home for OPD and possibly the municipal court. However, that could take another three to five years before construction even begins.

East said he didn’t want the city to make any major commitments for the current OPD building that would interfere with future plans for a municipal center, but he is looking for some short-term fixes to help alleviate the problem, which includes getting additional storage bins on site and possibly relocated The Pantry, which currently sits on property next to the OPD.

However, where The Pantry would be moved was not discussed.

Patterson directed East to come up with some short-term “Band-Aid” fixes and present them to the board.

While OPD struggles with space, the city’s Municipal Court may get some relief in the near future.

On Monday, Patterson said the city and county have been in recent talks to work on a joint city and county court building, which would be built near the Lafayette County School District campus on County Road 406. The city would lease the space for a courtroom and Clerk’s Office from the county for an undetermined amount of time.

A preliminary sketch was presented to the aldermen during the recessed meeting, of a 12,600 square-foot building with one large courtroom and two small courtrooms, a lobby, records room and several offices for both the city and the county.

“What makes this attractive is we don’t have any capital expenses or commitment,” Patterson said. “I really like this and think it’s something we should pursue.”

Lafayette County Supervisor Kevin Frye said the drawing was just an idea for the building and would prefer to have any actual plans reviewed by local attorneys who work daily at both the municipal and justice courts.

“I would suggest, if we move forward, there’s a committee formed that included local Bar members,” he said.

Once the lease was up, and the city courtroom and Clerk’s Office move out of the building, that space would be left open. However, City Attorney Pope Mallette said when that happens, maybe 10 years from now, the county would more than likely need the extra space since it’s growing in population along with the city.

Patterson said he did want to “give up the dream” of the city building a new municipal center down the road, but the joint project with the county would give the court and other departments currently inside City Hall some much-needed breathing room in the meantime.

No official vote was taken, but no aldermen expressed disinterest in pursuing the project with the county. Patterson said he would update the board as discussions with the county progressed.