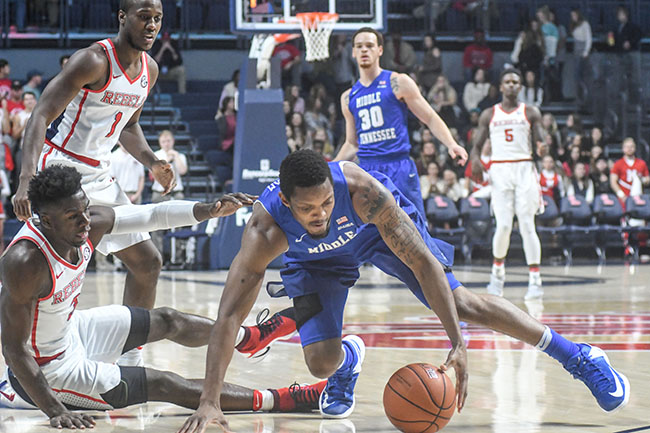 Andy Kennedy didn’t have a whole lot of positives to talk about following his team’s performance Wednesday.

That was if he could find anything to say at all.

Coming off a run to the Paradise Jam final the previous week with a chance to notch a quality non-conference win, Ole Miss’ men’s basketball team started poorly and never recovered in a 77-62 loss to Middle Tennessee State at the Pavilion at Ole Miss. MTSU led by as many as 29 in the first half and took a 48-19 lead at the break before holding off a late surge to hand Ole Miss its first home loss.

“It’s my job to have an explanation for that, and unfortunately I don’t,” Kennedy said. “I think you guys that have covered me know I’m pretty candid. I call it like I see it. Always have, always will. It’s unacceptable. It starts with me, and I’m going to do my job and try to get it corrected.”

Ole Miss began the night having given up the most points in the Southeastern Conference and ranked 338th nationally in 3-point field-goal defense, and the Blue Raiders dug into those sore spots. MTSU (7-1), an NCAA Tournament team a season ago, shot 48 percent from the field and 56 percent from 3-point range.

Giddy Potts led MTSU with a game-high 20 points. Reggie Upshaw finished with 15 points while JaCorey Williams chipped in 10 for the Blue Raiders, whose performance reminded the Rebels they’ve got a long way to go with more than half their roster playing at Ole Miss for the first time.

Tyree, who went 4 of 6 from the field in a season-high 16 minutes, may be in line for more playing time in the future, Kennedy said.

The Rebels had more than twice as many turnovers (14) as field goals (6) in the first half and didn’t make their first basket until Rasheed Brooks’ 3-pointer with 12:08 left in the first 20 minutes. MTSU built a double-digit lead less than four minutes in and went up 20 on a 3-pointer from Potts with 5:47 left.

“I think I’ve been in it 34 years in college coaching, and that half is about as good a half as you could possibly imagine,” MTSU coach Kermit Davis said.

Potts knocked down four of his first five 3-pointers as the Blue Raiders shot a blistering 82 percent (9 of 11) from deep in the first half. Ole Miss came in averaging an SEC-best 9.3 3-pointers a game but went just 7 of 20 from beyond the arc as the Rebels shot a season-low 40 percent from the field mostly against MTSU’s matchup 1-3-1 zone that’s similar to what Ole Miss goes up against every day in practice.

“The problem is I’ve got guys, for whatever reason, they just freeze up,” Kennedy said. “The second half, it wasn’t a problem because they were attacking. They were running the same stuff, the same personnel, and we had a different result because we had guys on the attack. I don’t know why we came out like that passively.”

Things don’t get any easier for Ole Miss on Saturday when the Rebels will be back at the Pavilion at Ole Miss to take on Memphis at noon. The Tigers are No. 88 in the latest KenPom ratings and already have a win over Iowa, an NCAA Tournament participant a season ago.

“We’ve got to bow up, and we’ve got to fight,” Kennedy said. “There’s two kinds of people in this world — fighters and flyers. I’m a fighter. Always have been and always will be. Figuratively and literally, I’m a fighter. This team’s going to fight.”

Watch Kennedy’s complete post-game interview in the video below.