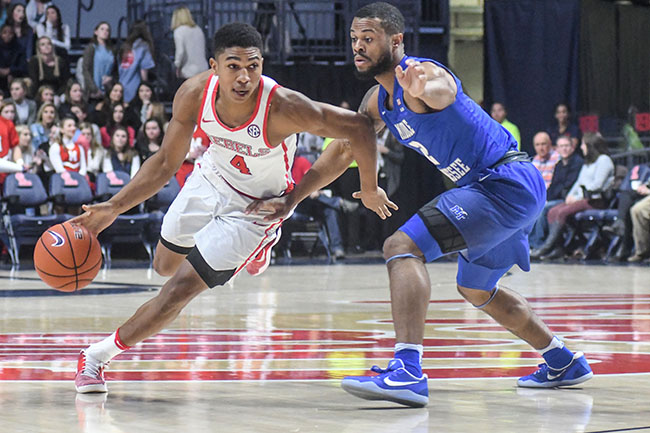 Any momentum Ole Miss’ men’s basketball team built with its 5-1 start and a strong showing in the Paradise Jam came to a halt Wednesday in a loss to Middle Tennessee State that had the Rebels trying to fight back from a 29-point deficit the entire second half. The good thing about basketball is you don’t have to wait a week like you do in football to get a chance to redeem yourself, but as you can glean from Andy Kennedy’s postgame comments, Ole Miss has a lot it has to fix as it goes through arguably its toughest non-conference stretch of the season.

Here are some takeaways from the Rebels’ loss.

Defensive communication is a mystery

A lot of things went bad for the Rebels against a solid MTSU team that will once again contend for the Conference USA title this season, but the lack of communication on defense has become a glaring issue.

Kennedy and his players talked at length about this being an area of focus before the game, but not much changed. Ole Miss is the worst team in the SEC when it comes to points given up and is among the worst nationally in 3-point field-goal defense, yet far too many times MTSU’s shooters, including stretch forward Reggie Upshaw, had squeaky clean looks. MTSU made nine of its first 11 shots from deep and finished at a 56-percent clip from 3-point range.

At times, it looked as if Ole Miss had never seen a pick-and-pop. Other times, the Rebels seemed confused as to who was guarding whom against MTSU’s half-court sets. By the time Ole Miss got some of that figured out and tightened up in the second half, it was too late with MTSU leading 48-19 at the half.

Kennedy said he sees a completely different energy level and focus in practice and wondered aloud if it’s nerves that kick in once the game rolls around. Whatever it is, the Rebels have to get it figured out.

The turnovers that were a problem at the beginning of the season plagued Ole Miss once again.

Frankly, the problem hasn’t really gone away, but the Rebels had cut them down recently, committing 14 or less in each of the previous three games after piling up 57 through the first contests (and that’s not counting the 20 they had in their exhibition win). But Ole Miss had 14 in the first half against MTSU, seven of those coming in the first four minutes.

Ole Miss turned it over just twice in the second half, but it didn’t matter much after the early onslaught. The most alarming part is half of the 16 turnovers were committed by the Rebels’ primary ballhandlers, Deandre Burnett (5) and Cullen Neal (3), while they all came against a defense Ole Miss knew was coming — the Rebels run the same morphing 1-3-1 defense the Blue Raiders have become known for under head coach Kermit Davis and practice against it every day.

Neal and Burnett (eligible after transferring from Miami last season) are two of the six newcomers who are playing together for the first time, but the chemistry among the group should be getting better as they play more games. Yet the Rebels are playing rushed and out of control more often than not.

Freshman guard Breein Tyree got his most extensive minutes of the season and led a charge in the second half that saw Ole Miss get as close as nine in the final minutes.

Tyree knocked down two quick 3-pointers early in the second half and scored all 11 of his points in the final 20 minutes. He also flashed quicks and athleticism to break down MTSU’s defense and ignite an Ole Miss offense that was far too stagnant in the first half.

“He just gives them such a burst,” Davis said. “Cullen has had a great year, but he’s really kind of a step-in 3, won’t really dribble by you. (Tyree) put his head down, and we couldn’t stop him. … He lifted their team.”

Kennedy talked highly of Tyree’s ability in the preseason, comparing the 6-foot-2, 192-pounder’s athleticism to that of NBA star Russell Westbrook when fully healthy. Tyree appears to be getting close to that after undergoing knee surgery in the spring, and his skill set is something Kennedy said the Rebels may have to use more often going forward.

Next up: Ole Miss (5-2) will host Memphis (6-1) on Saturday at noon. The game will be carried on the SEC Network alternate channel (stream).