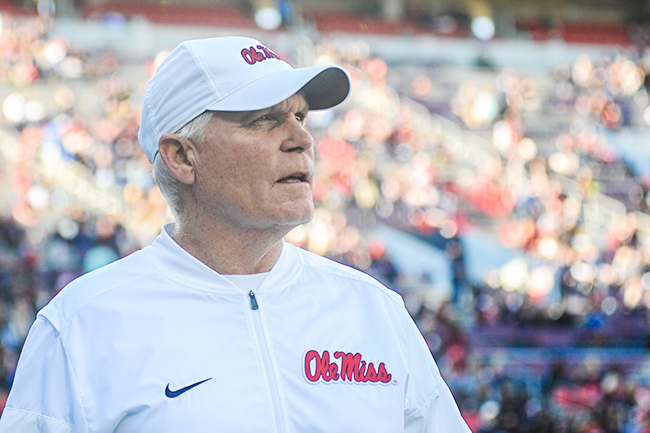 Dave Wommack was ready to step away, but this isn’t what he wanted to leave behind.

Ole Miss is in the market for a defensive coordinator after Wommack announced his retirement shortly before last week’s Egg Bowl. Instead of a spirited send-off for Wommack, the Rebels ended a dismal season with a lethargic loss in large part because of Wommack’s defense bottoming out, giving up a season-worst 55 points and a whopping 457 rushing yards.

“It was just kind of a downer this year, and I think this game kind of accumulated the whole thing for the season,” Wommack said.

A more successful season wouldn’t have changed Wommack’s mind. Wommack said he decided in the summer that this would be his final season and that he really wanted to retire after the 2014 season when Ole Miss led the country in scoring defense, but “my wife wouldn’t let me,” he said with a smile.

It’s been a steady decline for the defense since. Only Missouri has given up more yards in the SEC this season while the Rebels are last in the league in scoring defense and rushing defense. Ole Miss is 120th nationally out of 128 FBS teams against the run after yielding at least 200 rushing yards nine times.

How the Rebels had their worst defense of head coach Hugh Freeze’s tenure in Wommack’s 38th and final season of coaching is a collective answer, Wommack said. A secondary that started a true freshman and a sophomore in the opener against Florida State only got younger when Ole Miss’ best cover corner, Ken Webster, was lost for the season with a knee injury, and a defensive line that was missing defensive end Fadol Brown for half the season didn’t produce much outside of Marquis Haynes’ seven sacks.

But Wommack took the blame for Ole Miss not having enough talented players to fill in, particularly at linebacker, a position that shuffled starters on a weekly basis until coaches finally stuck with graduate transfer Rommel Mageo in the middle for the last four games. Leading tackler DeMarquis Gates was the only linebacker with more than 44 tackles.

Ole Miss has not signed a player at the position rated higher than a three-star prospect in Freeze’s tenure, according to 247Sports’ composite rankings.

“In the spring, I was really concerned about our linebackers and linebacker play,” Wommack said. “Hoped the transfers coming in might make a big difference for us. Really didn’t have anywhere to turn. I didn’t recruit the guys we needed to have in here that could help us stop the run, and it’s something that has to be addressed immediately.”

Wommack won’t be helping solve the problem, which is the only thing that bothers the veteran coach about walking away right now. That responsibility falls on Freeze, who’s searching for a replacement for the only defensive coordinator he’s had at Ole Miss since bringing Wommack with him from Arkansas State in 2012.

“He’s been in this business 38 years, and he’s done some remarkable things,” Freeze said. “He’s impacted young men, and he’s the type of guy you want in the profession. He really cares about the young men and has been good at it for a long time. It’s time for he and (wife) Leslie to go enjoy some time, and then it’s time for me to figure out which direction we go next.”

Wommack is looking forward to the next chapter of his life, one that will be far less grueling as a spectator. His son, Kane, followed in his footsteps and is the defensive coordinator at South Alabama.

“There’s so many demands put on coaches, and it’s a great profession,” Wommack said. “My son’s in it and obviously my best friends are in it, but the time demands. I’m 60 now, but I probably look like I’m 80 or 85 years old. I deserve a little time off.”

He just wishes there wasn’t as big of a mess for everybody else to clean up.

“This really stings going out this way, but that’s the way I guess it was meant to be,” Wommack said.