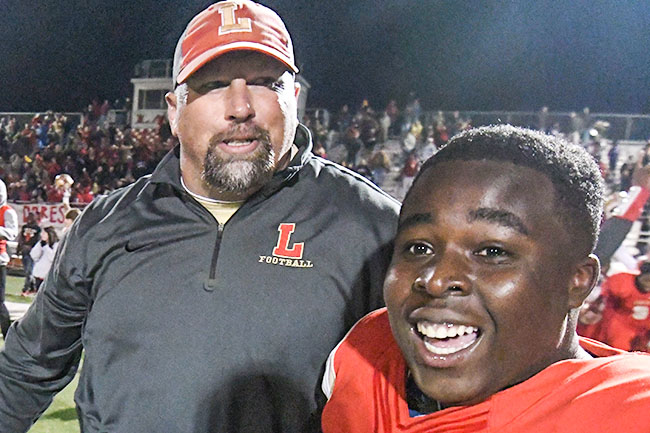 This may be Michael Fair’s first year at Lafayette and first time taking the Commodores to the state championship, but there is plenty of postseason and championship experience for him to fall back on as he prepares his team this week.

Before ending up at Lafayette by way of two years at Senatobia, Fair spent time at South Panola and Pillow Academy where he experienced success in state title games as an assistant coach.

At Pillow Academy, Fair helped lead the Mustangs to back-to-back Mississippi Association of Independent Schools (MAIS) Class AAAA-II championship appearances in 2009 and 2010. Pillow Academy fell to the Washington Generals, 34-7, in 2009 but returned the following year for a 28-14 victory over Oak Forest Academy out of Louisiana in 2010 for the football team’s third state title in school history.

Saturday will be his first time leading a Mississippi High School Activities Association (MHSAA) school to a state championship game as a head coach, but Fair has had experience as an assistant coach at South Panola and from 2002-06 went to the state championship game with the Tigers under then-head coach Ricky Woods. South Panola lost to Wayne County in 2002 but then rattled off what would be a run of five straight championships. Fair was a part of the first four from 2003-06.

“I remember the feeling of getting there and not winning,” Fair said of losing in 2002. “I’ve kept that in the back in my mind ever since Friday night. So we’ve been preparing this week for a football game. We’re going to enjoy it along the way, but we’re going to do everything we can to be successful.”

All the previous experience has helped Fair not only this week but for the entire season once Lafayette (12-2) began what has become a 12-game winning streak the fourth week of the season. Using the experience he gained from one of the state’s best high school coaches, Fair has helped keep his team level-headed and make it as much as a normal week as possible.

“We try to keep the same routine as we have all year long,” Fair said. “That helps a lot. I learned from (Woods). I’ve been on the phone with them, picking their brain about what to do and what I want to do this week. Trying to bounce some ideas off him, and if you pass that gauntlet with Ricky Woods and he says it’s a good idea, a lot of times it’s a good idea.”

Fair has turned Lafayette into a juggernaut, leading them to Saturday’s MHSAA Class 4A championship game against the Poplarville Hornets (3 p.m., 105.1 FM). After losing the first two games of the season to Horn Lake and Grenada, the Commodores have not lost, much like Poplarville (12-1), which lost their first game of the season and have won 12 straight.

While Poplarville poses a challenge with their wing-T offense, there is not much of an advantage for either team as the Hornets could not find any film of Lafayette playing anyone who has an offense such as theirs.

“We don’t know what to expect from (Lafayette),” Poplarville head coach Jay Beech said. “They’re an outstanding football team, well-coached. They look really good in the football uniforms. They’ll be the best team we’ve played this year by far.”