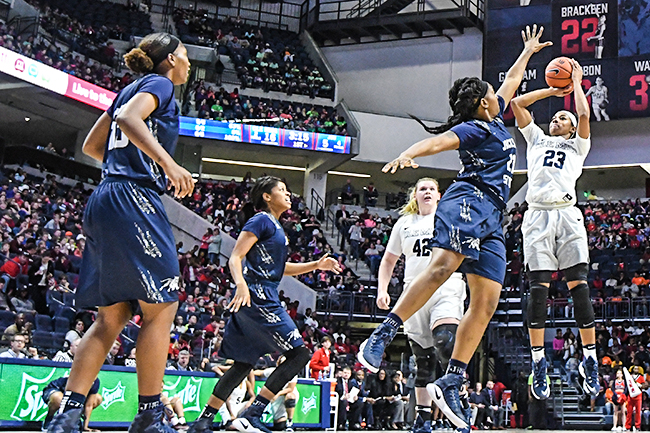 Ole Miss' Shandricka Sessom (23) shoots against Jackson State at the Pavilion at Ole Miss, in Oxford, Miss. on Thursday, December 1, 2016.

It was a slow start, but Ole Miss shook off the early 11 a.m. tip and put on a dominant performance in front of 8,088 screaming kids, defeating Jackson State 89-41 in the 14th annual ‘Kids Day’ game on Thursday morning inside the Pavilion. It was the largest crowd to ever attend a women’s basketball game at Ole Miss.

This equals the best start under head coach Matt Insell, as Ole Miss won six of their first seven games to begin the 2014-15 season as well. The was No. 800 in program history, making the Rebels the sixth Southeastern Conference team to hit that mark.

After four turnovers and only two points the first three minutes of the game, Ole Miss (6-1) turned things around and outscored Jackson State (3-2) 28-13 in the opening 10 minutes. It was more of the same for the Rebels, who used a 26-point second quarter for a 54-2 halftime lead over the Lady Tigers. Ole Miss outscored Jackson State 35-19 in the second half for the winning margin.

“Great bounceback win,” Insell said. “We had a lot of frustration built up in us a little bit from Sunday and got beat by a good UNLV team. We came out today and was a little bit of a slow start and then was locked in and played good basketball.”

Offense was on full display for Ole Miss as all but two players entered the scorebook with five of them reaching double digits. Shandricka Sessom led all scorers with 18. Bretta Hart scored 11 points.

Bench play was a factor as Ole Miss finished with 50 to Jackson State’s 29. Alissa Alston and Shelby Gibson provided a spark, coming in to combine for 26 points.

“It’s a big part of who we are, our bench,” Insell said. “If someone don’t play well it’s next man up. That’s kind of our approach to it. …I’m just real excited for this basketball team.”

Ole Miss returned home after their first road trip of the season, splitting two games in the UNLV Thanksgiving Tournament in Las Vegas last weekend. The Rebels defeated Wisconsin but fell to UNLV in the championship game for their first loss of the season. They will once again hit the road, as they take travel to No. 16 West Virginia (8-0) for the SEC/Big 12 challenge on Sunday at 3 p.m.

It only took seven games for Oxford native Erika Sisk to be come the 27th player in program history to reach the 1,000 mark for career points in a Rebel uniform.

The former Oxford Lady Charger needed 54 points to begin the season but after a hot start, needed only five points against Jackson State to reach the mark. She did it in the second quarter and finished the game with 12 points and a game-high six assists.