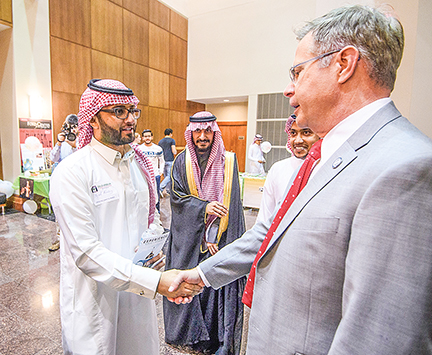 The Gertrude C. Ford Center for the Performing Arts was filled with the sounds, sights and aromas of the Middle East recently as the University of Mississippi’s Saudi Arabian Student Organization hosted a cultural exhibit featuring traditional Saudi dance, cuisine and culture.

“The purpose of our event was to represent our cultural theme through a documentary film, Saudi traditional dance, a Saudi heritage exhibit and cultural fair with complimentary Arabic coffee and food to share with the UM community,” said Bjad Almutairy, the festival’s executive director and SASO president.

The documentary was an original film created by Almutairy and Abdullah Alotaibi, the group’s director of social and cultural affairs. In another video directed by Ammar Nahari and edited by Mohammed Al-Harthy, American students at Ole Miss shared perspectives about Saudi Arabia.

For the event, the committee members wore traditional Saudi attire. The exhibit also featured special decor and an Arabic reception that represented the nation’s culture. The group also conducted activities such as learning to write your name in Arabic and a henna tattoo station.

SASO teamed with the Ole Miss Department of Theatre Arts to present a play called “Saudi Student Journey to The U.S.” This original production written by Almutairy, Alotaibi, Nahari and Mohamed Suaib and directed by Austyn Davis and Riette De Jager.

The play took a humorous approach to focus on the experiences of Saudi and other international students facing the challenges of language barriers and cultural differences.

Guests for the evening include Chancellor Jeffrey Vitter and his wife, Sharon; Brandi LaBanc, vice chancellor for student affairs; and Donald Cole, assistant provost and assistant to the chancellor for multicultural affairs

“Sharon and I had a wonderful time at the Saudi National Festival,” Vitter said. “We truly treasure that we can have these amazing international experiences from our Oxford campus. It is an important part of university life to offer global opportunities and a rich multicultural climate for our students, faculty, and staff.”

The festival provided an entertaining glimpse into the culture of another country, LaBanc said.

“We tasted wonderful food and drink and learned about all aspects of the Saudi culture,” she said. “I am very appreciative of the efforts of SASO to bring their culture and country to our campus – there is so much fun in exploring and celebrating cultural difference.”

“These events are so valuable to our institution because we realize that not every one of our students will go abroad and programs such as this can help give our students a more global perspective that they would otherwise not receive,” Cole said. “It was impossible to attend this event and not learn.”