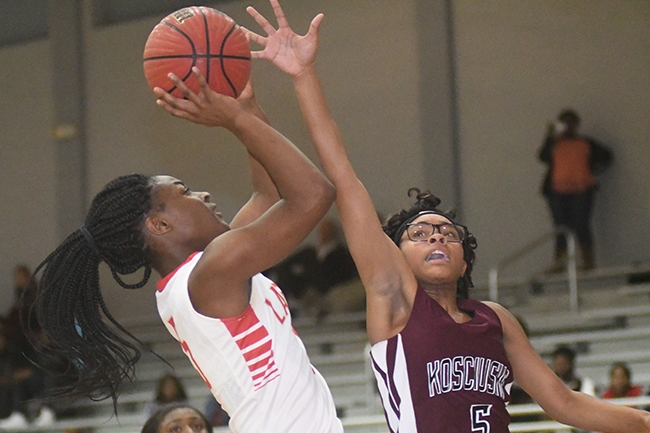 If this is what the Lafayette’ girls basketball team will look like when everything is clicking, the rest of the 4A north half may want to take notice. The Commodores remained perfect on the young season, defeating Kosciusko 68-27 on Thursday night inside the LSH gym. It was the first game for Lafayette since Nov. 15 as their game against North Panola on Tuesday was cancelled due to the severe weather in the area.

It was a mixture of suffocating defense and a balanced offense that led Lafayette (4-0) to a convincing victory over the Whippets of Kosciusko (4-4) in a game that was never close. The Commodores jumped out to a 23-4 lead after the opening quarter and kept the peddle down from there. A 16-point second quarter helped Lafayette take a 39-15 lead into halftime.

“We hadn’t played in about two and a half weeks and I wasn’t sure if we were going to come out rusty,” Lafayette head coach Shayne Linzy said. “It was almost like it was a first game type feel. (Kosciusko) is a lot quicker than I thought they were. We kicked it in a high gear and took off from there.”

The dominance continued as Lafayette outscored the Whippets 17-5 in the third quarter, following it up with a 12 point fourth quarter to finish off the victory.

Senior Sheniyah Buford scored a game-high 15 points to go with six rebounds and seven assists. Xhiir Burgess recorded 11 points and six rebounds. Offense was in high supply as nine Commodores found their way into the scorebook.

“The great thing I think right now about is us we’re so balanced scoring-wise,” Linzy said. “Who are you going to stop? Are you going to stop Sheniyah? Be my guest. I got eight other girls who can put the ball in the net. You want to stop one of them then Sheniyah is going to hurt you.”

While the girls are not losing, it is the exact opposite for the boys as they remained winless after falling to Kosciusko 43-37. It was a moral victory for Lafayette (0-3) who held the Whippets 20 points below their season average.

The low-scoring affair played into the Commodores hands as they were unable to score in bulk, which helped them trail by only five points with two and a half minutes left. They were unable to get any closer as Kosciusko (5-3) outscored Lafayette 3-2 in the final minutes to hold on for the win.

“I thought we battled,” Lafayette head coach John Sherman said. “We’ve had trouble taking care of the ball, making right decisions with the ball. Offensively, I think we’re too shot happy. We’re not patient enough on offense. …We held this team to 20 points below their average. To hold them to 43, you would think we could score 44.”

After this weekend, the Commodores will be back to full strength as Brandon Turnage and Randy Anderson will rejoin the basketball team after the football team’s state title game against Poplarville on Saturday.