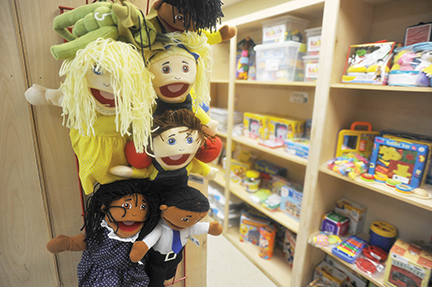 Bruce Newman Toys are hung and on shelves at the LOU Excel by 5 Coalition Family Resource Center in February 2013. The center recently closed and is currently in limbo about when or if it will reopen.

The future of the Lafayette Oxford University Excel by 5 Coalition Family Resource Center is still up in the air as local and state agencies continue to hash out how to handle its reorganization.

The doors to the Oxford center, which allowed parents, teachers and caregivers to check out educational toys and books at no coast, closed in mid-November after learning the Mississippi Department of Human Services was ending its contract with MSU for its early childhood program.

The Early Years Network program is housed in the MSU Extension Service and funded by the Mississippi Department of Human Services Division of Early Childhood Care and Development to provide early care and education programs and materials for teachers, directors, children and families to help improve the well-being of Mississippi’s children.

In Oxford, the LOU Excel by 5 Coalition partnered with MSU to extend its services in Oxford and opened the resource center in 2013 near the old Oxford Mall in a building owned by the University of Mississippi.

However, closing the center may have been done a bit prematurely.

A few days after the Oxford center closed, on Nov. 17, MSU and MDHS issued a joint statement saying the contract between the two to operate the Early Years Network program will end Dec. 31.

“On Jan. 1, 2017, MDHS will assume full leadership of these programs. MSU and MDHS will continue to work cooperatively and diligently to operate these sites through the end of the contract period to continue to serve the needs of Mississippi families impacted by this program and to seek solutions that keep the flow of services from being interrupted during this orderly transition.”

About 130 people will lose their jobs around the state due to ending the Early Years Network.

In November, representatives from the United Way, McLean Institute for Public Service and Community Engagement, and Excel by 5 met recently to discuss ways to keep the resource center open in Oxford through local support.

The United Way said they hoped to have the center back open in January.

However, after the joint statement was released, Edy Dingus, AmeriCorps VISTA volunteer with the United Way of Oxford & Lafayette County said the local and state Excel By 5 organizations have “decided to take no further action until we’ve heard plans from MDHS.”

A spokesman from the MDHS said more details would be released in January.