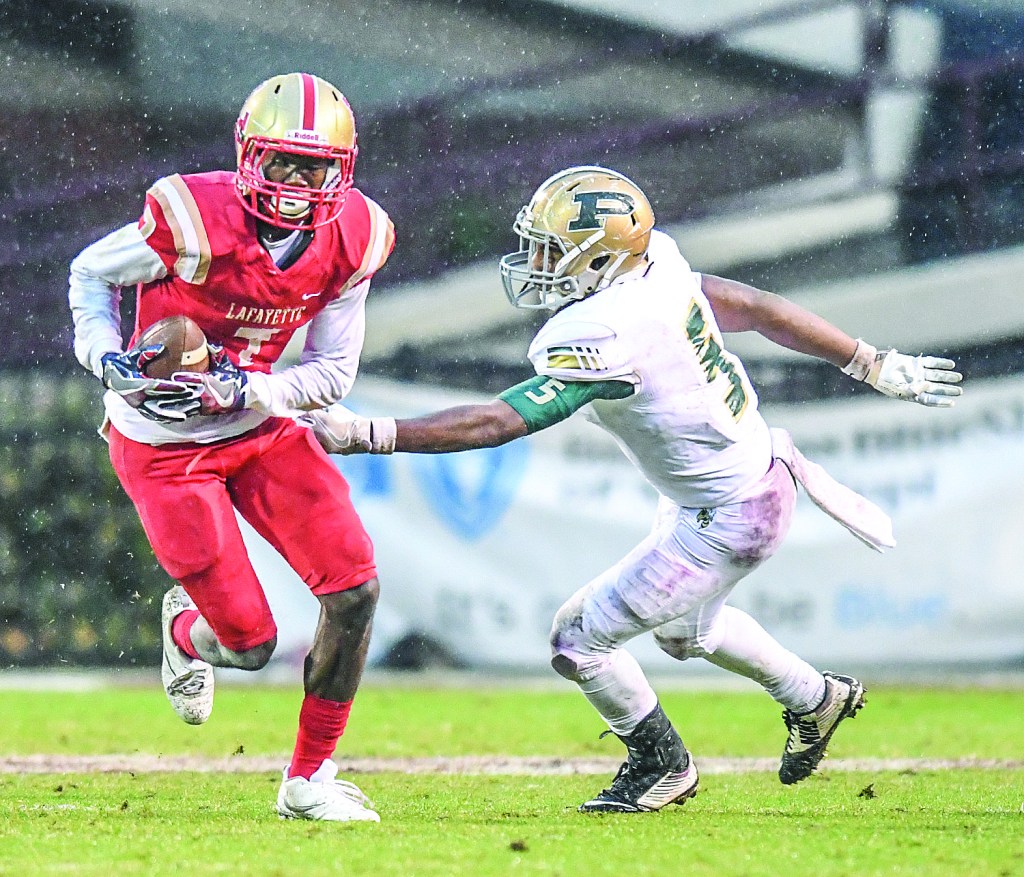 Lafayette High's Brandon Turnage (7) catches a lateral to Poplarville's Austin Bolton (5) on a flea flicker and runs it back for a touchdown in the MHSAA Class 4A state championship game, at Davis-Wade Stadium in Starkville on Saturday. (Bruce Newman)

Poplarville’s running game has shown up in the second half. The Hornets have 253 yards on the ground and the latest run came from Peyton Graham for an 11 yard touchdown. Lafayette 27, Poplarville 12 6:35 4Q

The Hornets finally get the zero off their side of the scoreboard as they cap a 11-play, 77-yard drive with a four yard touchdown run by Jesse Pernell. Lafayette 27, Poplarville 6 :57 3Q

Poplarville then fumbles it two plays into their possesion and Lafayette’s Xavier Martin recovers it. Commodores then used six plays and nearly 3 minutes of clock to score on a 24 yard run by Jamie Shaw. Key play on the drive was a 19-yard run by Quarles on a 3 & 16. Lafayette 27, Poplarville 0 5:06 3Q

Lafayette gets the ball to begin the second half as the rain started falling harder during the break. Commodores’ drive stalled and a fake punt attempt went awry. Poplarville has it at the Lafayette 45. Lafayette 20, Poplarville 0 8:44 3Q

Craziness ensued in the final moments of the first half. Dillon Woods returned a punt for a touchdown but it was called back for a block in the back. Will Ard then hit and fumbles the ball with Poplarville recovering. Very next play Poplarville fumbles and Brandon Turnage returns it for a 65-yard touchdown. Lafayette 20, Poplarville 0 :17 2Q

Lafayette’s defense has given up a couple big plays but for the most part has shut down this Poplarville offense. On a 4th and long, Hornets quarterback Antonio Barnes is sacked for a turnover on downs. Poplarville has 97 total yards

Poplarville’s mistake does cost them as Jamarcus Quarles runs for a 20-yard touchdown after Lafayette takes advantage of a pass interference call on the Hornets. Lafayette 14, Poplarville 0 8:15 2Q

The mistake does no damage as Tay Tay Owens picks off Antonio Barnes. Lafayette in business at the Poplarville 30 yard-line.

On the first play of the second quarter, Will Ard’s pass is intercepted by Poplarville’s Camden Ray at the Hornets’ 1. Poplarville on the move at their 18 yard-line. Lafayette 7, Poplarville 0 10:55 2Q

End of the First Quarter: Lafayette 7, Poplarville 0. Commodores have a 3 & 10 facing them to start the second quarterl.

Lafayette’s defense is getting a grip on the Hornets’ wing-t scheme and force a second Poplarville punt in as many drives. ‘Dores have it near midfield.

It took only two plays for Lafayette to find the end zone. After a three-yard run by Jamarcus Quarles, quarterback Will Ard hits a wide open Tyler Williams for a 77-yard touchdown pass. Lafayette 7, Poplarville 0 7:53 1Q

Poplarville gets the ball to start and has early success as Lafayette attempts to figure out the Wing-T. ‘Dores defense stuffs Poplarville at midfield, forcing a punt on their opening possession. 0-0 8:43 1Q

What: MHSAA Class 4A State Championship

Preview: Lafayette rolled through the North Half of the bracket with a potent offense and stingy defense. They will rely heavily on the ground game of Jamarcus Quarles and Jamie Shaw, especially with the wet weather. Poplarville has reached their first state championship game in program history and did so by using the unconventional offense of the wing-t. Defense, and possibly Mother Nature, will be the key factors as the Commodores look for their first state title since 2011.