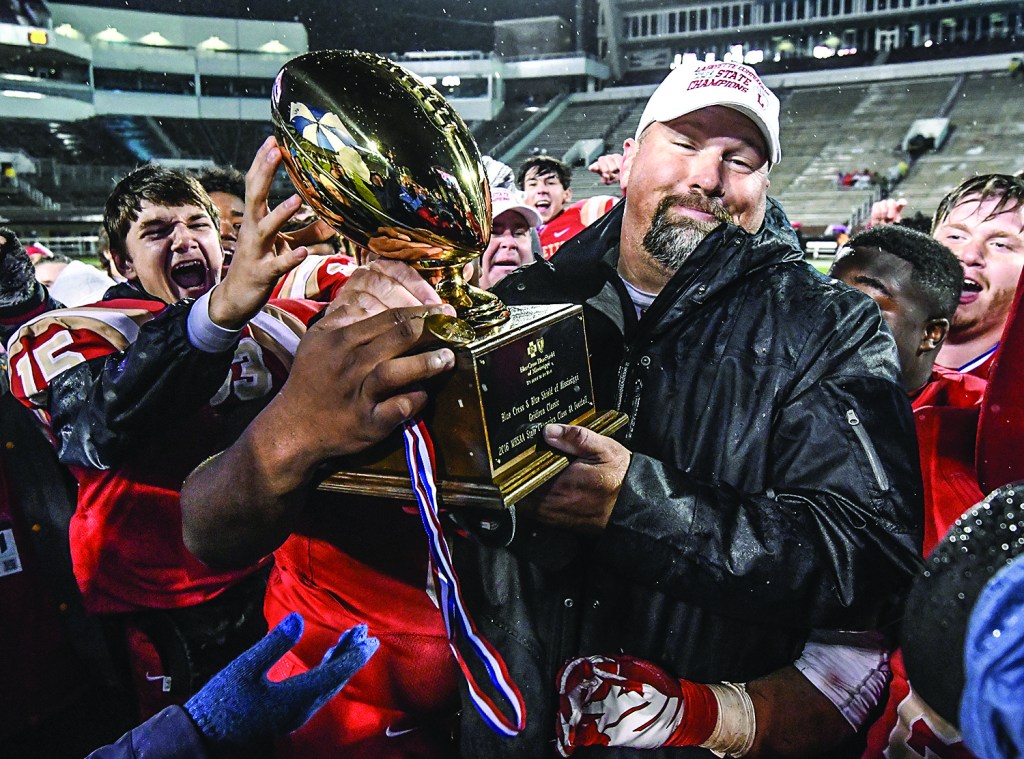 Lafayette High coach Michael Fair accepts the trophy after the win over Poplarville in the MHSAA Class 4A state championship game, at Davis-Wade Stadium in Starkville, Miss. on Saturday, December 3, 2016. Lafayette won 27-12.

When Michael Fair took the Lafayette head coaching job back in the summer, leaving Senatobia after two years, he had one goal in mind. That goal is now a reality as Lafayette battled the elements to defeat Poplarville 27-12 to claim the MHSAA Class 4A state championship at Davis-Wade Stadium on Saturday afternoon.

It is the third state title in program history and first since 2011. The win extended Lafayette’s winning streak to 13 games and handed Poplarville their first loss since falling to St. Martin in their opening game of the season on Aug. 19.

“At Lafayette, the expectations are high,” Fair said. “There’s a lot of tradition there and we embrace. We don’t shy away from it. I was proud for these guys. They really deserved it.”

The plan was simple for both teams, rely on the running game. Lafayette (13-2) had Jamarcus Quarles and Jamie Shaw. Poplarville had the scarcely-seen wing-T scheme. The game started with a plot twist as the rain poured down. On the second play of Lafayette’s opening possession, quarterback Will Ard found receiver Tyler Carmichael-Williams wide open for a 77-yard touchdown strike and an early 7-0 lead in the first quarter. It was game on from there.

“Honestly, I thought I overthrew him,” Ard said of his pass. “Then, (Williams) is really fast and he caught up to the ball. I’m just going to give him all the credit.”

The Commodores’ defense stifled Poplarville (13-2) and the offense did their job, scoring on three of their first six possessions. After a second straight Poplarville punt, Lafayette needed only two plays to go 30 yards as Quarles rumbled into the end zone on a 20-yard score for the 14-0 lead with nine minutes left in the half.

With momentum firmly on Lafayette’s side of the field, their lead grew even more commanding after a chaotic ending to the half. Dillon Woods returned a Poplarville punt for a touchdown, but a Commodore penalty negated the score. Then Ard was hit and fumbled the ball and Poplarville recovered. Two plays later, the Hornets attempted a hook and ladder play only to fumble it into Brandon Turnage’s waiting arms. The sophomore took it 65 yards for the touchdown and a 20-0 lead into halftime.

“(Turnage) was great,” Williams said. “He’s a heck of an athlete. The kid’s got a bright future. He had a heck of a season.”

Lafayette added one more touchdown midway through the third quarter when running back Jamie Shaw scored from 24 yards out to make it a 27-0 lead at the time. Shaw finished with 38 yards on four carries and a touchdown while Quarles led the Commodores’ rushing attack with 70 yards on 22 carries and one touchdown.

Ard finished his final high school game completing six of seven passes for 104 yards with one touchdown and one interception.

The Poplarville offense got going in the second half, but it was a little too little, too late for the Hornets. Late in the third quarter, running back Jesse Pernell knocked the zero off the scoreboard with a 3-yard run, cutting Lafayette’s lead to 27-6 after a failed extra point attempt. Running back Peytan Graham recorded Poplarville’s other touchdown with an 11-yard run midway through the fourth quarter for the final margin.

The Hornets finished with 322 yards on 59 carries as Pernell led the way with 216 yards and the touchdown on 26 carries. Austin Bolton followed Pernell with 45 yards on 17 carries. The Poplarville air attack was non-existent as quarterback Antonio Barnes was 2 of 8 for 21 yards.

It was as if Mother Nature was preparing Lafayette for Saturday’s game two weeks ago. In the Commodores’ quarterfinal matchup with Louisville, a monsoon hit the area and did not let up the entire game. It was a carbon copy of the elements at Davis Wade Stadium, and Lafayette did not seem to mind one bit.

“I think we played a little better in the rain,” Fair said. “Everybody knows it’s raining and it’s no big deal. We just came out here and played. I felt like if we handled the field conditions and played with some good field conditions, we’d be in great shape.”