Ole Miss men’s basketball bounces back with win over Memphis 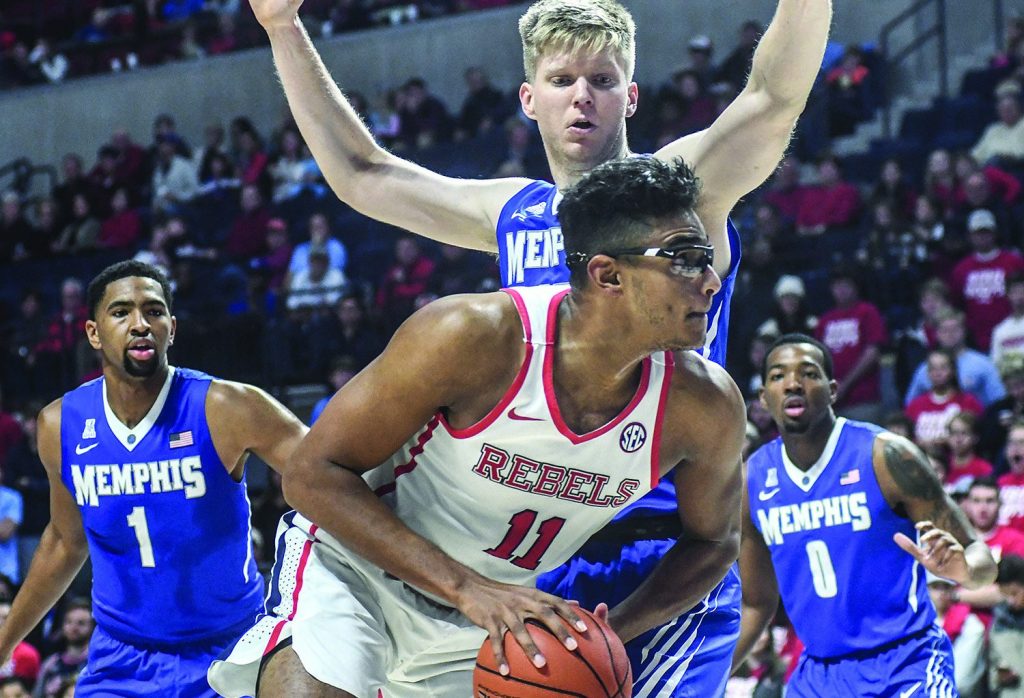 If there’s such a thing as a must-win game in December, Andy Kennedy thought Saturday’s was it for Ole Miss’ men’s basketball team.

Ole Miss lost a double-digit lead early in the second half but used a late surge to beat Memphis 85-77 on Saturday at the Pavilion. The Rebels (6-2) bounced back from a lethargic loss to Middle Tennessee State three days earlier to pick up their best win of the season over the Tigers, who began the day at No. 89 in the updated KenPom ratings, with a Dec. 11 trip to Virginia Tech next on the schedule.

“We knew in order for our season to have hope, you’ve got to protect your home floor and you certainly can’t drop two in a row at home prior to going to an ACC team next (Sunday),” Kennedy said.

Sebastian Saiz led all scorers with 20 points and pulled down 16 rebounds for his fourth double-double of the season after finishing with just eight points against MTSU. Deandre Burnett had 19 points and five assists while Cullen Neal added 12 points for Ole Miss.

“It was a must-win the way we saw it,” Saiz said. “Our backs were against the wall. We were coming from that kind of loss, and we needed a win.”

The Rebels actually gave themselves a chance Saturday after a 29-point halftime deficit didn’t give them much of one against MTSU, but it wasn’t easy.

Memphis cut the lead to 83-77 with 22 seconds left but didn’t make another basket.

Burnett hit two free throws to make it a three-possession game again and finished 8 of 8 from the free-throw line as the Rebels shot 85 percent (28 of 33) from the charity stripe. Ole Miss also had a season-low 11 turnovers.

“Can you believe that?” Kennedy said of Davis’ elaborate dunk attempt in a tie game. “We’re growing as a team, and the reality was we’ve got a lot of guys in a lot of spots who have never been there. It’s nice to grow with a win, especially in a rivalry game so to speak where I know it’s very important to a lot of Ole Miss people.

“Wish it had been a little smoother, but quite frankly we probably needed that. We can grow from it and learn from it. I was really pleased with our approach the last couple of days after the debacle of a first half (against MTSU).”

Kennedy shuffled the starting lineup by going with freshman guard Breein Tyree and Davis in the backcourt. The duo combined for 15 points as the Rebels responded to the change, taking a 47-37 lead into the break and using that influx of athleticism on the perimeter to their advantage on both ends of the floor.

Ole Miss began the day with the SEC’s worst scoring and 3-point field goal defenses but held the Tigers to just 42.6 percent from the field and 31.6 percent (6 of 19) from 3-point range. Forward Dedric Lawson came in as Memphis’ leading scorer at 22 points a game but finished with a season-low eight points in 22 minutes while battling foul trouble.

“A lot of it was a breakdown on the perimeter where guys get beat off the dribble, our post men have to come over and help and now he’s in foul trouble,” Memphis coach Tubby Smith said of Lawson’s struggles “That’s pretty much what happened, although I think they did a pretty good job defensively.”

K.J. Lawson led Memphis with 17 points. Markel Crawford had 16 points while Jeremiah Martin finished with 14 for the Tigers, who pulled down 17 offensive rebounds to score 20 second-chance points.

Ole Miss made a conscious effort to go inside from the start to Saiz, who scored 13 points and grabbed seven boards in the first half. The senior forward fought through double teams as the game wore on to put up his highest point total since scoring 22 against UMass in the second game of the season, helping the Rebels quickly put that ugly showing against MTSU behind them.

“I watched (the MTSU film) three times, and it was awful every time,” Kennedy said. “We showed it to the guys, and they owned it. That’s what I was proud of. They owned it.”