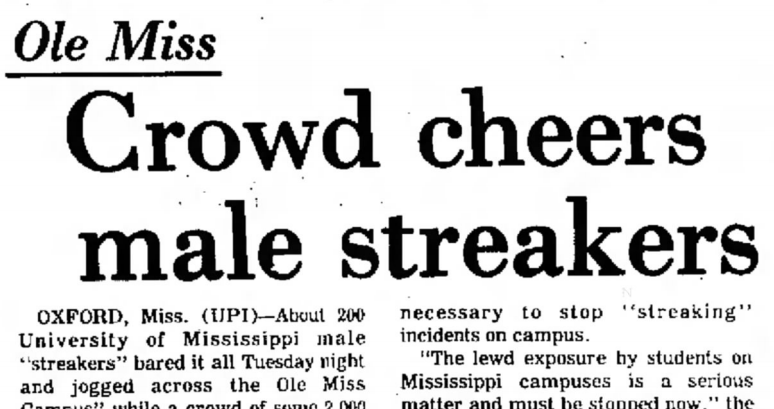 There’s no reason to be talking about this, except that it came up recently in a conversation about historical key moments in Ole Miss and Oxford history.

That, and the memory is so captivating I have not been able to let it go.

It’s about the moment many years ago when the moon shone bright and the late winter temperature spiked to unseasonably warm highs that many Ole Miss students took off their clothes and ran naked through campus.

You won’t find much about this in history books, if you can find anything at all, since streaking was a 1970s fad that academics and many journalists didn’t aptly recognize for fear they might encourage more of the behavior.

But it went something this. The streaking fad that began in Los Angeles had trickled to college and university campuses in late 1973. Stephen F. Austin University in Texas had many streaking episodes, for instance, and a couple of Memphis State football players were arrested for running through campus naked that year.

But the first quarter of 1974 is when streaking became a defining thing for college students nationwide, and Ole Miss’ moment was one of the more attention-grabbing at the time. Streaking reports had surfaced in January and February of that year from campuses around the country, but it was the first days of March, when record warmth spiked from the cold winter, bringing high temperatures of 80 degrees with lows in the 60 across the Deep South.

The moon was nearly full the night Ole Miss students, reportedly numbering in the hundreds, organized, stripped, and streaked through campus in the warm, shimmering-light night behind a motorcycle escort.

Just nine years old at the time, I remembering awakening to rumors that pierced our Oxford elementary school of the naked bodies sprinting through campus. Since there was no social media nor TV news cameras there, it was hard to know how extensive this streaking affair was.

So that afternoon I walked down the street to visit two college students who rented a basement apartment and kept me educated on the ways of the broader world – whatever happened on campus. I asked the boys if they had heard about the streaking.

I asked if they had participated.

“Johnny did,” the one said, pointing to his roommate. “But nobody really knew he was nekkid because he’s so hairy it looked like he was wearing black corduroy shorts.”

By the next day we knew the streaking rumor was true because Mississippi’s Governor Bill Waller issued a statement against streaking, and because the national media, including the New York Times, made mention of Ole Miss’ naked night run.

“Unseasonably warm weather in many areas encouraged waves of streaking incidents from Harvard Square to Ole Miss,” wrote the Times.

Gov. Waller was more pointed in response. He urged college presidents in Mississippi to “utilize every force” to stop streaking.

“The lewd exposure…is a serious matter and must be stopped now,” he said.

The more interesting aspect of the Ole Miss streaking episode is that through the grapevine, as word traveled, the Rebels laid momentary claim to setting the world record of having the most streakers at one time — which was generally the aim of the event in the first place.

But since it happened in the dark of night under only the moonlight and illumination from the motorcycle headlamp, nobody really knew if it was a record or not.

“The University of Mississippi claims to have set the world streaking record,” wrote a college newspaper in St. Louis, “But due to the nature of the sport an accurate body count is difficult. The Ole Miss claim is currently being disclaimed by competing colleges.”

So in the end, Ole Miss’ finish in the streaking competition was much like a football season. Ole Miss didn’t win the championship, but the Rebels certainly made some national noise.

David Magee is publisher of The Oxford Eagle. You can contact him at david.magee@oxfordeagle.com.