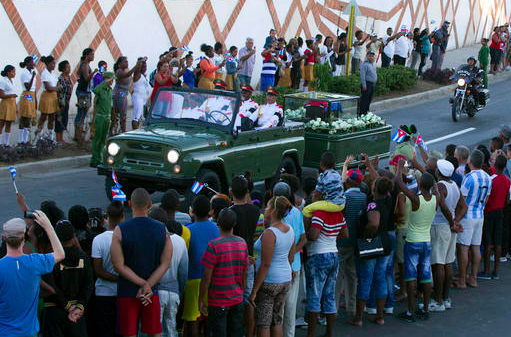 BEIJING (AP) — Was President-elect Donald Trump signaling a shift in U.S.-China relations when he referred to Taiwan’s leader as “president” following a phone call this past week or was it an unintentional misstep?

His phone conversation with Tsai Ing-wen was a breach of long-standing tradition that risks enmity from China, but a longtime China watcher says he can’t yet be sure of the meaning.

Douglas Paal, a former director of the American Institute in Taiwan, which unofficially represents U.S. interests in Taipei, said it was too soon to judge whether Trump was going to lead that shift, or if the incident was just a “complicated accident.”

“Beijing will watch closely to see which it is,” said Paal, now vice president for studies at the Carnegie Endowment for International Peace. “But until someone from Trump Tower explains further, it is unknowable.”

The U.S. shifted diplomatic recognition to China from Taiwan in 1979. But the governments in Washington and Taipei have maintained close unofficial ties and deep economic and defense relations. The U.S. is required by law to provide Taiwan with weapons to maintain its defense, and since 2009, the Obama administration has approved $14 billion in arms sales to Taiwan.

Trump’s conversation with Tsai drew an irritated, although understated, response from China, as Foreign Minister Wang Yi said Saturday that the contact was “just a small trick by Taiwan” that he believed would not change U.S. policy toward China, according to Hong Kong’s Phoenix TV.

“The one-China policy is the cornerstone of the healthy development of China-U.S. relations and we hope this political foundation will not be interfered with or damaged,” Wang was quoted as saying. Chinese officials said they lodged a complaint with the U.S. and reiterated a commitment to seeking “reunification” with the island, which they consider a renegade province.

The call was the starkest example yet of how Trump has flouted diplomatic conventions since he won the Nov. 8 election. He has apparently undertaken calls with foreign leaders without guidance customarily given by the State Department, which oversees U.S. diplomacy.

“President-elect Trump is just shooting from the hip, trying to take phone calls of congratulatory messages from leaders around the world without consideration for the implications,” said Bonnie Glaser, senior adviser for Asia at the Center for Strategic and International Studies in Washington.

Over the decades, the status of Taiwan has been one of the most sensitive issues in U.S.-China relations. China regards Taiwan as part of its territory to be retaken by force, if necessary, if it seeks independence. It would regard any recognition of a Taiwanese leader as a head of state as unacceptable

Taiwan split from the Chinese mainland in 1949. The U.S. policy acknowledges the Chinese view over sovereignty, but considers Taiwan’s status as unsettled.

Ned Price, a spokesman for the White House National Security Council, said Trump’s conversation does not signal any change to long-standing U.S. policy on cross-strait issues. Yet the phone conversation prompted mixed reactions.

“People will think that the U.S. will keep on helping Taiwan protect itself against China’s threat,” Yang said.

Taiwanese newspapers ran banner headlines Sunday about the call, and two noted on their front pages Sunday that Trump referred to Tsai as “the president of Taiwan,” a formulation that would be a huge shift in American policy and infuriate China.

The Taiwanese presidential office said Trump and Tsai discussed issues affecting Asia and the future of U.S. relations with Taiwan. “The (Taiwanese) president is looking forward to strengthening bilateral interactions and contacts as well as setting up closer cooperative relations,” the statement said.

Tsai also told Trump that she hoped the U.S. would support Taiwan in its participation in international affairs, the office said, in an apparent reference to China’s efforts to isolate Taiwan from global institutions such as the United Nations.

Taiwan’s presidential office spokesman, Alex Huang, said separately that Taiwan’s relations with China and “healthy” Taiwan-U.S. relations can proceed in parallel. “There is no conflict” in that, he said.

“It must be pointed out that there is only one China in the world and Taiwan is an inseparable part of Chinese territory,” Geng Shuang, a ministry spokesman, said in a statement. “The government of the People’s Republic of China is the sole legitimate government representing China.”

China is likely to be trying to identify whether this signals any intent on the part of Trump to alter long-standing U.S. policy toward Taiwan, Glaser said.

“They will hope that this is a misstep, but I think privately, they will definitely seek to educate this incoming president and ensure that he understands the sensitivity of Taiwan,” she said.

After the phone conversation Friday, Trump tweeted that Tsai “CALLED ME.” He also groused about the reaction to the call: “Interesting how the U.S. sells Taiwan billions of dollars of military equipment but I should not accept a congratulatory call.”