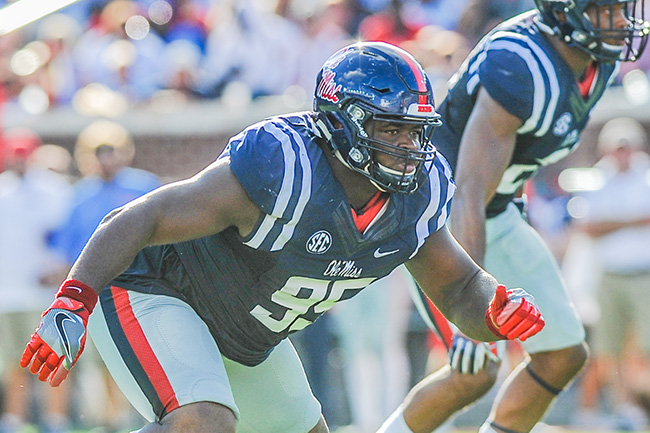 Defensive tackle Benito Jones (95) was one of 11 true freshmen to play for Ole Miss in 2016 and one of seven to start at least one game. (Bruce Newman)

Hugh Freeze got a lot of use out of Ole Miss’ highest-ranked signing class in program history.

More than he even thought he’d get.

Freeze in the preseason touted his most recent crop of signees as perhaps the best he’s had in his five-year tenure, and he wasted no time getting them on the field with 11 true freshmen playing this season. More than half started at least one game while safety Myles Hartsfield, offensive tackle Greg Little, defensive tackle Benito Jones and quarterback Shea Patterson ended the season as starters.

Some of the contributions were expected. Others weren’t.

Hartsfield, a prep school signee, started every game at rover in the Rebels’ new-look secondary after grabbing the starting job left by Trae Elston in the spring while Jones, Little and Patterson were five-star prospects in a class ranked as high as No. 4 nationally by ESPN. Hartsfield finished with 43 tackles and a pass breakup on a defense that lacked playmakers.

Hartsfield and fellow safety Deontay Anderson, who saw his playing time gradually increase to the point where he got his first start in the finale against Mississippi State, may have provided a preview of what Ole Miss’ defense could look like on the back end for the next few years along with cornerback Jaylon Jones, who got one start.

“Myles had a spring to learn and Deontay didn’t, and I think he has learned his athletic ability and length and physicality,” Freeze said of Anderson. “Once he starts learning everything, it just puts him in a position to get more reps.”

Little spent the first half of the season rotating with Rod Taylor at left tackle before an ankle injury to Taylor helped him get the job permanently as the 6-foot-6, 330-pounder started the last five games. Benito Jones’ athleticism and quick first step made him an immediate part of the rotation on the interior of the defensive front and eventually allowed him to overtake Breeland Speaks as the starting defensive tackle.

The 6-2, 308-pound Jones tallied 39 tackles and 4.5 tackles for loss despite getting just four starts.

“The thing that I constantly look at after games on the grade sheet is really several key indicators about effort, and you don’t have to worry about his being a mistake of effort,” Freeze said of Jones. “He gets it and loves this place and is going to be a really great player.”

The physicality of A.J. Brown and D.K. Metcalf made the pair instant contributors among a deep and talented receiving corps, though the majority of Metcalf’s impact will have to wait after the 6-4 red-zone threat was sidelined with a broken foot after two touchdowns in two games. Brown was the Rebels’ second-most productive freshman receiver behind redshirt Van Jefferson with 29 catches for 412 yards and two scores.

“He is going to continue the tradition of wide receiver success that we have here,” Freeze said of Brown during the season.

No newcomer was more surprised to see the field than Patterson, who was in line to redshirt before Chad Kelly’s knee injury changed that plan. Freeze was convinced Patterson gave the team the best chance to win and decided to go with his prized signee with three games left.

“I wasn’t expecting to play until next year,” Patterson said. “Just prepared all year like I was the starter. Whether you’re second string or third string, you’ve just got to prepare all year like you’re the starter. I believe what you do in the dark is either going to reward you or expose you when you finally get that chance.

Patterson dazzled in his debut, throwing for 339 yards and two fourth-quarter touchdowns to help rally Ole Miss past Texas A&M. He looked more like a freshman against Vanderbilt and Mississippi State, combining to complete just 52 percent of his passes with three interceptions in those games.

Youth was served in bunches for Ole Miss this season, but Freeze is hopeful that experience will pay off in the future.

“I’m satisfied at this point,” Freeze said. “I think (Patterson) is a great piece to build the future of this program offensively around.”