The legend of ‘Ole Bully’ Wohleben and the Yankee payroll 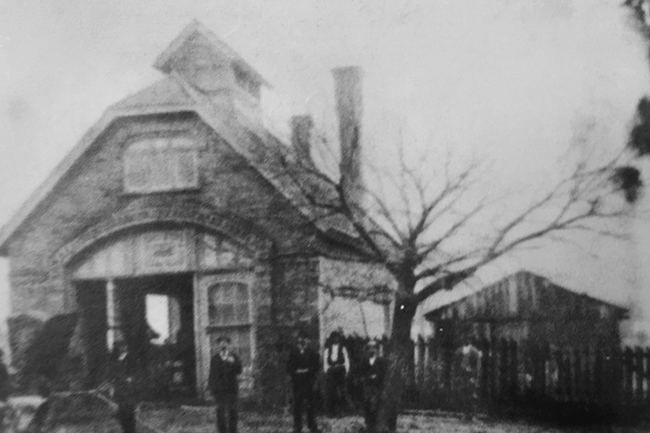 On days I do tours on the Double Decker, if the traffic is bad like on a football weekend, I try to keep talking and giving out old stories and legends. A story I sometimes tell is one I think is one of the better folklore stories of an Oxford resident and an incident during the occupation of north Mississippi by Union soldiers around Christmas 1862.

The legend concerns a lowly blacksmith and how his fortunes changed that Christmas season in 1862. The name of the man is Herman Wohleben (I have seen it spelled several ways Wohleben and Wohlenben) and he was an immigrant from Germany. His nickname was Ole Bully and he came to Oxford before the Civil War and opened a blacksmith shop.

The legend also concerns the Union paymaster at the Yankee supply depot just north of Oxford in Holly Springs. Grant and Sherman had about 34,000 soldiers in the area of Oxford and College Hill. They had stored supplies in Holly Springs, just up the railroad from the encampments. Along with the supplies, the Paymaster had large sheets of printed federal banknotes. When a pay period happened, the paymaster would get scissors and cut out the banknote.

One thing within the legend is how the banknotes were handled in the Federal camp. According to Oxford folklore, when Van Dorn made his raid on the Union army located at Holly Springs on Dec. 20, 1862, a raid was also made on the Depot on the east side of town, where the paymaster’s office was located. In this office was a stack of uncut U.S. banknotes. These notes were in sheets that measured four bills across and five bills down for a total of 20 bills per sheet.

Ole Bully was said to have made three trips to Oxford with sheets of bank notes under his saddle blanket. He then had his wife bury them on their property, to be dug up after the war. He then rode back to meet up with Van Dorn across the Tennessee line. After the war, he was one of a very few men who had any money… cash money not just some sort of script.

Differing accounts of the legend have Ole Bully and his wife coming to Mississippi from Germany to Ohio and then to Oxford. They would have five daughters while Ole Bully worked as a blacksmith. His blacksmith shop was adjacent from where Proud Larry’s stands today, on the same side of the street. They had their living quarters in the rear of the shop. Later they would move to a small cottage on North Street (now North Lamar Boulevard) around 1860. He would join the CSA at the beginning of the war and would become a wagon master for Confederate General Earl Van Dorn.

To his great luck, if the legend is true, he was to be in the right place and the right time — The Holly Spring Depot/U.S. Army Paymaster’s Office.

After the war, Ole Bully prospered and so did his family. His five daughters married quite well and their husbands, along with Ole Bully, owned a good portion of the business properties around the Square and some on the side streets. It was said Ole Bully set his sons-in-laws up in business after the war.

One married into the Cobb family who later owned Longstreet’s home on North Street (The Walker Swaney property), the Hudson on South 11th Street, the Sultan family at Fiddler’s Folley, the Carter family on North Street, the James Thomas Glenn family and the J.E. Neilson family of Ammadelle on North Street. Ole Bully would also become executive vice president of the Merchants and Farmers Bank.

What was done with the money after the war has several different stories about how it made its way into the economy of Oxford. Some say Wohleben put the cash in a bank in Nashville, where from time to time he would make a withdrawal. Others say he would peel off notes from time to time, and others say he only did that on Thanksgiving each year. However it happened, the cash still made its way into Oxford’s economy.

You could say even though the Yankees may have burned Oxford, it was rebuilt with stolen Yankee payroll.

The story or legend of Ole Bully Wohleben and the Yankee payroll is a good one; but whether it is true or not is debatable. William Faulkner uses the story in one of his novels, “Requiem for a Nun.” He describes a man, “a German private, a blacksmith, a deserter from a Pennsylvania regiment, who appeared in the summer of ‘64, riding a mule, with (so the tale is told later, when his family of daughters had become matriarchs and grandmothers of the town’s new aristocracy for saddle-blanket, sheaf on sheaf of virgin uncut United States banknotes…”).

Another one of the good stories about the Wohleben girls is about Belle, who was born before the war in 1861. She would marry the son of W.S. Neilson, J.E. The elder Neilson started Neilson’s Department Store in 1839. When the Yankees were encamped in and around Oxford in December 1862, young Belle, who was just a toddler, crawled away on the morning of Dec. 21, 1862 as the Yankees were making a hasty retreat out of Oxford.

The Yankees left behind something that young Belle really wanted. When her mother and sisters missed her, they found her hanging by her right arm on a cooking tripod and then reaching with her left arm and hand, down deep into a large black pot of black-eyed peas. She was steadily eating as many peas as she could. This young girl would later become one of the Grand Dames of Oxford, but that Christmas she was hungry as was most of the town of Oxford.

Young Belle and her family, along with their neighbors, all had their fill of black-eyed peas furnished by retreating Yankees.