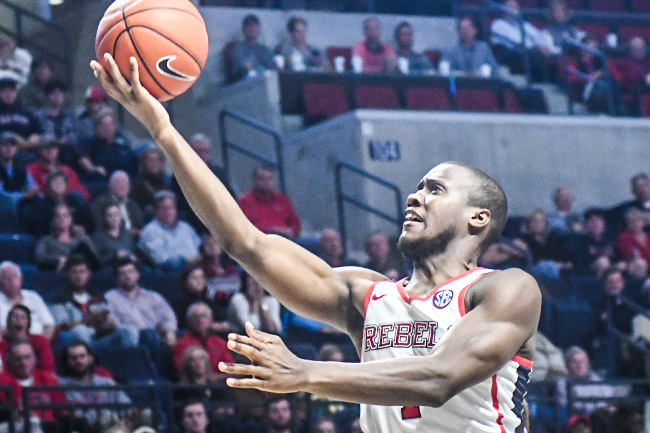 Ole Miss’ Deandre Burnett (1) shoots against Middle Tennessee State at the Pavilion at Ole Miss on November 30, 2016. Burnett leads the SEC in scoring, averaging 21.6 points per game in his first year with Ole MIss. (Bruce Newman)

Things are the same yet different for Deandre Burnett this season.

Burnett’s career at Ole Miss is off to a strong start with the junior guard leading the Southeastern Conference in scoring at 21.6 points per game, no surprise for a player who’s used to frequently putting the ball in the basket. Burnett was one of the nation’s best at it as a high school senior when he averaged 37 points as a Parade All-American in 2012.

He’s had to wait four years to make that kind of impact again.

Burnett, a Florida native, signed with Miami and redshirted his first season with the Hurricanes because of a wrist injury. He started three games during the 2014-15 season, but minutes were hard to come by on a veteran roster as he averaged just seven points.

Burnett transferred to Ole Miss but sat out last season to fulfill NCAA transfer rules. Now he’s taking advantage of his opportunity as the veteran.

“It’s a big difference,” Burnett said. “At Miami, I had older guys in front of me, so basically it was kind of like a wait-your-turn thing. Now I’m the older guy on the team and have to lead by example. It’s two different roles. So far, I think I’m holding up.”

Burnett is helping the Rebels ease the loss of Stefan Moody, the SEC’s leading scorer a season ago. The 6-foot-2, 192-pound Burnett has led Ole Miss in scoring in five of its eight games with the ability to get his points in different ways, shooting 37 percent from the floor, 43 percent from 3-point range and 94 percent (63 of 67) from the free-throw line, the 15th-highest clip nationally.

“At Miami, I was basically used the same way,” Burnett said. “Used to score and guard some of the best players on the other team. It’s no different. I’m scoring and basically guarding and just making plays.”

There’s still work to do for Burnett to round out his game, Ole Miss coach Andy Kennedy said, particularly on the defensive end. The Rebels are giving up more points than anybody in the SEC.

“We’re still trying to help him in other areas,” Kennedy said. “That just could be maybe I anticipated it being easier for him earlier. I told you guys he can score. … He’s independently trying to do things sometimes that are not in his or our best interest, and defensively he’s got to get a lot better. He knows that. He owns that. We’ve just got to get him better in that regard.”

Burnett began his Ole Miss career with 23 points in a season-opening win over Tennessee-Martin and exploded for a career-high 41 points in a Paradise Jam win over Oral Roberts, setting single-game tournament records for points and 3-pointers made (9). Burnett was named to the all-tournament team, but Ole Miss came up short of the tournament championship with a loss to No. 10 Creighton in the finals.

“It was kind of a letdown at the end of the day that I accomplished a lot of things individually but we didn’t win,” Burnett said. “The winning is what matters the most to me.”

Ole Miss’ next chance to do that comes Sunday at Virginia Tech. Burnett is enjoying finally being able to help.

“I’m an older guy, so whatever the team wants me to do, I have no problem stepping up and doing it,” Burnett said. “If it’s scoring, I’ll score. If it’s guarding, I’ll guard. Whatever the teams needs, I’m willing to do.”