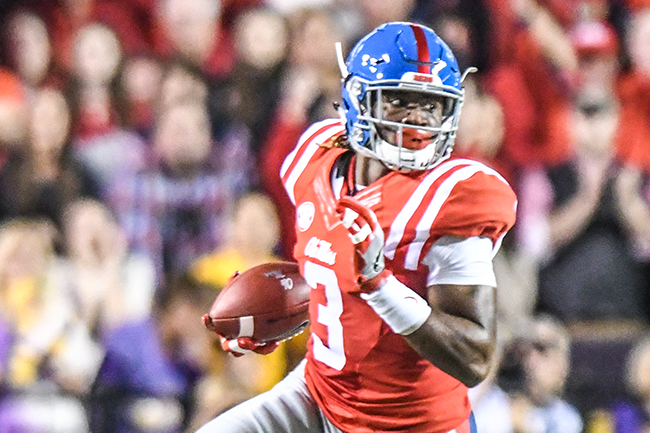 Junior receiver Damore’ea Stringfellow announced he will forgo his final collegiate season and declare for next year’s NFL Draft. Stringfellow played two seasons at Ole Miss after transferring from Washington and finished his junior season with 46 catches for 716 yards and six touchdowns, ranking in the top 10 among Southeastern Conference receivers with 59.7 receiving yards per game.

Stringfellow finished his Ole Miss career with 82 receptions for 1,219 yards and 11 scores. He said in a statement it was time “to pursue my dreams of playing on Sundays.”

“I cannot begin to express to Rebel Nation what an honor and privilege these last three years have been putting on the Ole Miss jersey each Saturday,” Stringfellow added. “The fans’ endless support, both on and off the field, has allowed me to grow and develop into the athlete and man that I am today.”

A California native, the 6-foot-2, 219-pound Stringfellow played his freshman season at Washington before transferring to Ole Miss before the 2014 season. He sat out that season to require NCAA transfer rules before becoming a two-year starter on the outside for the Rebels.

“I am grateful to Damore’ea for his commitment to our program,” Ole Miss coach Hugh Freeze said. “He has a tremendous opportunity, and we are excited for him to enter the next phase of his life. We look forward to seeing another Rebel receiver in the NFL.”

Stringfellow is the third starting receiver the Rebels are losing off this year’s team counting tight end Evan Engram, who led Ole Miss in receptions (65), yards (926) and touchdown catches (8). With senior Quincy Adeboyejo included, the Rebels will have to replace more than half of their 289 receptions this season and 2,098 of the team’s 3,779 receiving yards.

Derrick Jones, who started the season at receiver but moved to cornerback, is also out of eligibility, but Ole Miss has depth at the position. Redshirt freshman Van Jefferson’s 543 yards and three touchdown catches were both third-most on the team while true freshman A.J. Brown finished with 29 receptions for 412 yards and two scores.

Markell Pack, DaMarkus Lodge and Oxford native D.K. Metcalf, who caught two touchdowns in the first two games before a broken foot sidelined him for the rest of the season, will also be back. Freshman Tre Nixon redshirted and will join the fold next season.

Ole Miss also has a pair of receiver commitments for the 2017 recruiting class in Morton’s D.D. Bowie and R.J. Sneed of Cypress Ranch High in Texas.