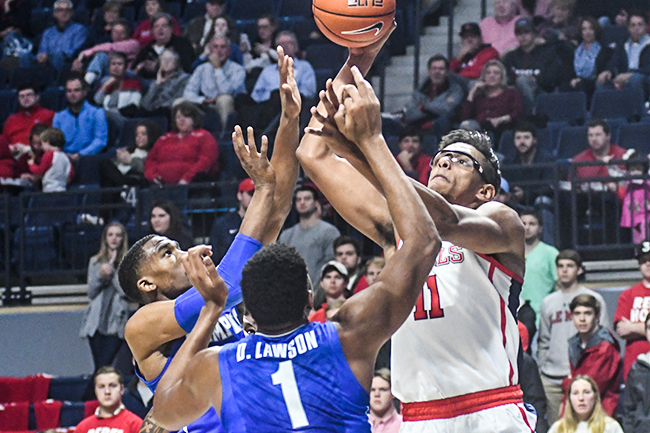 Sebastian Saiz has responded to the challenge.

Ole Miss coach Andy Kennedy was adamant in the preseason about wanting the Rebels’ seasoned forward to take his game to another level. More specifically, Kennedy wanted Saiz to be the Southeastern Conference’s leading rebounder and average a double-double in his final collegiate season.

Through eight games, Saiz is doing that, comfortably leading the battle of the boards at 11.5 a game — Georgia’s Yante Maten and Kentucky’s Bam Adebayo are next at 8.3 boards per game — while averaging 14.1 points.

He’s doing it despite the extra defensive attention he’s getting.

“Sebas has been double teamed more this season through eight games than he probably has been in his career,” Kennedy said.

The 6-foot-9, 240-pound Saiz is the SEC’s active career rebounding leader and has 13 career double-doubles. Ole Miss is 4-0 this season when Saiz reaches doubles figures in points and rebounds, so teams know beating the Rebels starts with limiting Saiz’s effectiveness.

They’ve started throwing an extra defender at Saiz more frequently when he gets the ball around the rim. Creighton routinely double-teamed Saiz in the Paradise Jam championship last month, limiting him to season-lows in field-goal attempts (4) and points (4), while Saiz put up just five shots and finished with eight points against Middle Tennessee State’s morphing 1-3-1 defense last week.

“I guess once you start being a good player, they try to double-team you,” Saiz said. “I wish it was one-on-one to see who’s better, but I guess all the teams are scared of doing that with me.”

Memphis often collapsed on Saiz with multiple defenders Saturday, but Saiz got aggressive to combat it. He often made his move toward the basket quicker than the double team got there or shot over the top of it, going 7 of 15 from the field and 6 of 8 on free throws as he finished with 20 points and matched his season-high with 19 rebounds.

Saiz also showed patience when he was trapped, either finding the open teammate on the perimeter or passing back out to start the rotation to get someone else a clean look. Ole Miss finished with 17 assists on 25 made shots and committed a season-low 11 turnovers in its best win of the season, according to the latest KenPom ratings.

“Sebas was the man, and that’s what you want your workhorse to be,” Kennedy said. “We were going to run offense through him early despite them doubling him.

“I think he’s getting much more comfortable with it and making better decisions.”

Saiz is one of four Ole Miss players averaging double figures, yet that balance hasn’t altered the strategy by opponents to try to minimize Saiz’s influence on the game. Now that he’s getting used to it, Saiz plans to continue making them pay one way or another.

“Just bring it,” he said. “I can handle whatever you’ve got.”