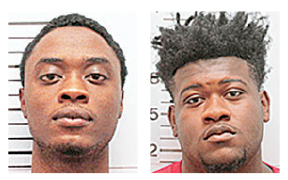 The Oxford Police Department arrested two Oxford residents for allegedly being involved in a burglary where 13 guns were stolen.

According to OPD, on Nov. 16, officers responded to the 3000 block of Lyles Drive in reference to a burglary where a total of 13 firearms, valued at over $26,000, were stolen. It was determined that employees with the 3 Men Moving Company had unlocked a window inside the home and someone entered the house from the outside. However, during the investigation, it was determined the two movers had knowledge of the burglary.

On Dec. 2, investigators arrested Darryl King, 20, and Christopher Shaw, 19, and charged them with grand theft. They were taken to the Lafayette County Detention Center where they were booked on a $30,000 bond.

Some of the firearms have been recovered.