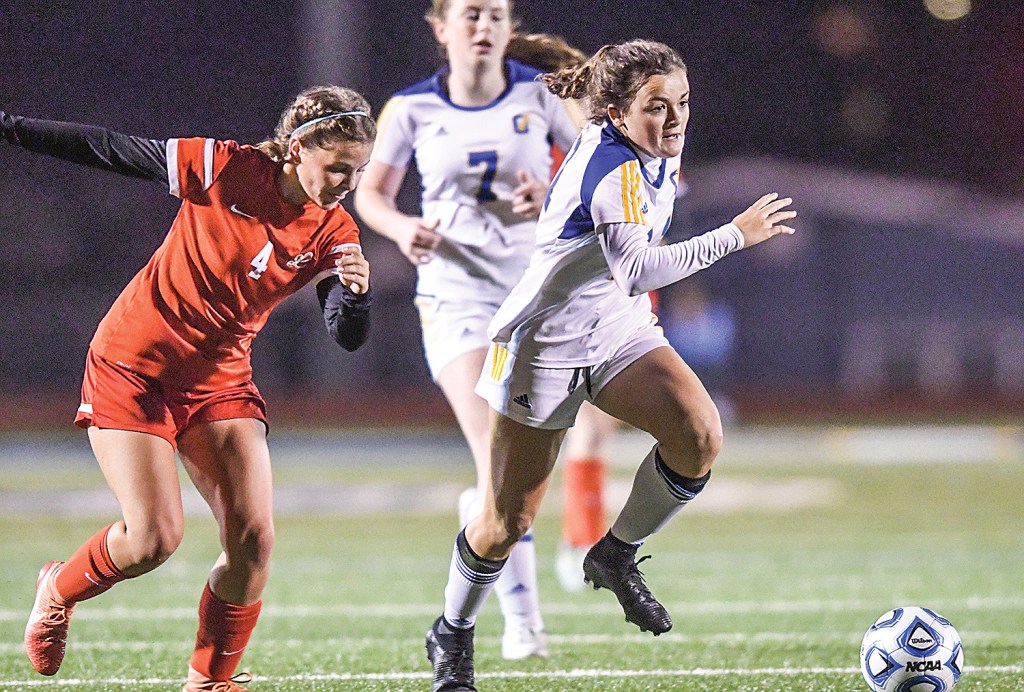 Oxford’s Morgan O’Connor (11) breaks away from Lafayette’s Madison Lee (4) and scores in the first half in girls soccer action at Bobby Holcomb Field in Oxford on Tuesday. O’Connor scored six goals in Oxford’s 8-0 win. (Bruce Newman).

There is not much that Oxford can do wrong these days. The girls’ team is the defending Class 5A champion, and they look primed for a repeat one month into the season. That early season dominance continued as the Chargers defeated crosstown rival Lafayette 8-0 at Bobby Holcomb Field on Tuesday night. The win is Oxford’s ninth straight as they have not lost yet to begin the year.

It was close between Oxford (9-0) and the Commodores (2-4-1) until it was not. Less than one minute into the game, Morgan O’Connor navigated through the defense and found the back of the net for the quick 1-0 lead. From there, it was a tightly contested match for about 21 minutes. Then midway through the first half, the dam broke and Oxford, mainly O’Connor, filled the net up at will.

The ninth-grader would go on to score five more goals, putting her season total to 29 just nine games into the year. Ally Shinall added two of her own in the 33rd and 36th minutes, respectively.

“We scored the first 52 seconds then the next 15 to 18 minutes we were a little off our game,” Oxford head coach Hunter Crane said. “We weren’t possessing. We were getting a little flustered trying to press the ball forward and stuff like that. They got settled in.”

Lafayette’s defense was sound after the early goal, keeping Oxford, which is ranked No. 9 in the nation by MaxPreps, out of the net until the barrage began. It has been a first month of the Commodores adjusting to two new goalkeepers and trying to find the right combination before region play begins later this month.

“These girls are talented girls, and I think unfortunately the results are not where we want them to be,” Lafayette head coach Melinda Scruggs said. “We’re playing some very good teams. We’re playing in some different systems trying to use some different ideas. Sometimes it gets us on the other end, but it’s hard to try something new. We’re coming. We have tons of talent.”

There were not as many fireworks in the boys’ games at the onset as there were in the girls’ game preceding them, but Oxford managed to take the lid off the goal for a 7-0 victory over their rival. It was looking like a scoreless first half until the final minute of play. Oxford (7-2) found the net with goals from James McKey and Wilkes Davis in the 39th minute, taking a 2-0 lead over Lafayette (1-7) at halftime. Oxford continued the scoring with a goal in the 58th minute of play followed by a goal from Preston Huggins in the 66th minute. Late in the match, Keaton Calhoon scored three goals while Gray Jenkins scored a goal in the final 10 minutes of play for the winning margin.

Both teams will return to the pitch later this week when Oxford opens Region 2-5A play with visiting West Point on Thursday while Lafayette will host Saltillo on Friday.

Between the varsity matches, both middle school teams got in games with the Oxford girls winning 4-1 while the boys’ game ended in a 0-0 draw.