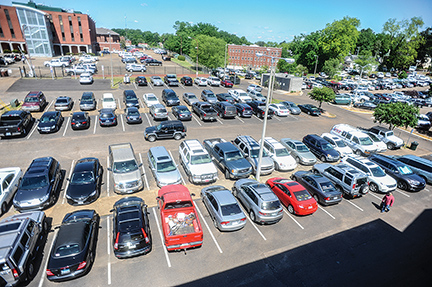 Within the next two years, the downtown Square could be home to a new parking garage.

On Tuesday, the Oxford Board of Aldermen accepted the recommendation from the Downtown Parking Advisory Commission to build a parking garage off Jefferson Avenue, behind the Oxford-University Club.

The vote was 6 to 1, with Aldermen Janice Antonow being the dissenting vote.

“I’m against it and many citizens are too and I just can’t vote for this,” she said, noting the city could take other measures to relieve congested parking during peak times.

Antonow also pointed out that during construction, which is expected to take about a year, the 100-plus parking spaces currently located where the garage would be built, would not be accessible.

“People will come and not be able to find a place to park and will go elsewhere to shop and eat,” Antonow said.

In 2013, a study was done to examine two possible locations for a parking garage — behind Oxford Square North, in the area commonly known as the city car lot, and behind City Hall. The commission, at that time, thought the City Hall spot would be the best location. However, to do that it would mean an existing condominium in the rear of the existing parking lot would have to be removed and the owner said he had no intention of selling the property.

The talk of a parking garage died down for a couple of years after the city put in stricter parking enforcement around the Square which helped move the cars and created more empty spaces.

In September 2014, the city started a paid-parking system and metered most of the downtown parking spaces around the Square, leaving the outlining city-owned lots free. The paid parking has also helped to move cars but occupancy studies have shown that during business hours and dinner time, most of the spaces are full, especially Wednesday-Saturday.

The need for a parking garage came back up and in the fall, of 2015 the commission was tasked again to determine if a parking garage was needed and then if so, where should it be built and how would the city pay for it.

In May, the commission changed its recommended location to the spot behind the OU Club.

Part of the commission’s recommendation was to pay no more than $9 million for the garage using a bond that would be paid back over 20 years with revenue from the parking meters and overtime parking tickets.

Commissioner Tom Sharpe told the aldermen Tuesday that with the occupancy rates of the free parking lots exceeding 90 percent at peak hours during the day and evening, the need for a garage is apparent.

The aldermen also approved using a design-build method to build the garage, rather than a design, big, build method. With a design-build, the designer and contract are often the same company or team and work together on the project from start to finish.

The Public Works Department will hire an architect firm to put together preliminary drawings to include in a Request for Proposals.