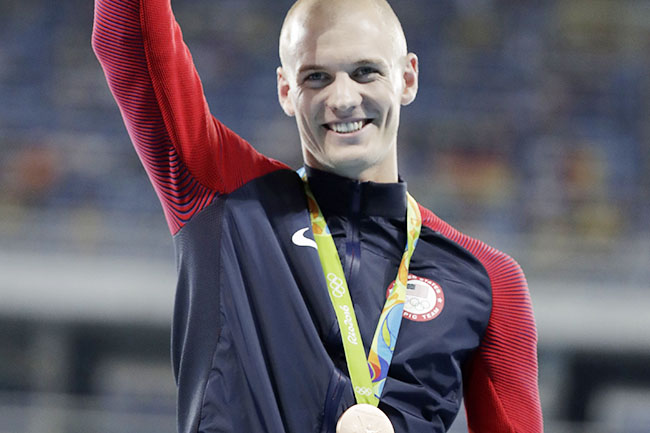 United States’ Sam Kendricks celebrates during the medal ceremony for the men’s pole vault final at the athletics competitions of the Summer Olympics at the Olympic Stadium in Rio de Janeiro, Brazil, on Tuesday. The Oxford native reached his goal of medaling by winning the bronze in his first-ever Olympic Games. (AP Photo/Andrew Medichini)

Ole Miss Fellowship of Christian Athletes will host its fourth annual breakfast event at 8 a.m. on Feb. 25 at the Manning Center.

The breakfast is sponsored by Craddock Oil Company and will feature father-and-son Ole Miss alums Sam and Scott Kendricks.

Sam won the bronze medal in the pole vault at the 2016 Olympics in Rio. As an Ole Miss student-athlete in his hometown, he was a two-time NCAA outdoor champion in the pole vault (2013, 2014) and a semifinalist for the 2013 Bowerman Award while breaking both the indoor and outdoor pole vault school records on several occasions. Sam is an outspoken Christian, a second lieutenant in the U.S. Army Reserve and friend of FCA.

Scott is Sam’s father, coach and mentor. He served 14 years as head cross country and track coach at Oxford High School, leading the Chargers to 11 state titles. He was a volunteer assistant with the Ole Miss pole vaulters during Sam’s college years and continued as his coach into Sam’s professional career. Scott was a captain in the U.S. Marines after graduating from Ole Miss.

“We are excited and proud to have Sam and Scott as our speakers for this year’s FCA Breakfast,” Ole Miss FCA Director Todd Johnson said. “It’s great to have quality people in our local community and a part of the Ole Miss family get to share how God has transformed their lives. The Kendricks family has impacted our local and state area, and we’re excited for them to share the foundation upon which their lives are founded.”

Joining the breakfast as the master of ceremonies is Hugh Freeze’s longtime mentor, Ken Smith. He is a former chaplain for legendary Florida State coach Bobby Bowden and a 2010 FCA Hall of Champions inductee.

Corporate tables are available at $1,000 and sponsor tables at $500. Each table receives eight tickets, and corporate sponsors also receive an autographed poster of Sam Kendricks and admission to a brief meet-and-greet time with Sam and Scott following the breakfast. Individual tickets are $100. Each person will also receive a free general admission ticket for the Ole Miss baseball game when the Rebels take on UNC-Wilmington at 1:30 p.m. at Swayze Field.

Tickets can be ordered online at www.olemissfca.org. For further information about the breakfast, contact Johnson at 662-816-7928 or toddjohnson@fca.org.