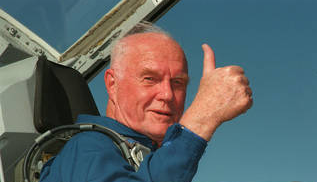 Former astronaut and U.S. Sen. John Glenn has died in Ohio. He was 95.

Glenn became a national hero in 1962 when he became the first American to orbit the Earth.

Glenn was the third U.S. astronaut in space and the first of them to get into orbit. He circled the Earth three times. The Soviet Union had put a man into orbit a year earlier in 1961.

Glenn then spent 24 years as a Democrat from Ohio in the Senate and briefly made a run for president in 1984. He returned to space in 1998, at age 77, aboard space shuttle Discovery.

He was the last survivor of the original Mercury 7 astronauts.