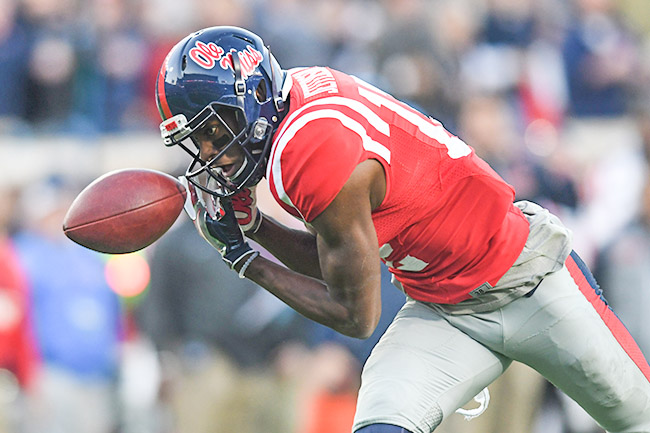 Ole Miss receiver Van Jefferson drops a pass against Mississippi State at Vaught-Hemingway Stadium in Oxford on Nov. 26. The Rebels’ offense sputtered late in a 5-7 season, averaging 23 points in their final five SEC losses and just 4.8 points in the second half of those games. (Bruce Newman)

Ole Miss’ struggles on defense this season were well-documented, but it’s not the only side of the ball that’s being re-evaluated, particularly with the way the Rebels bogged down in the latter part of a 5-7 season.

Ole Miss is in line to finish with the Southeastern Conference’s top passing offense and third-best scoring offense, but points were harder to come by the later the season got for an offense that’s next to last in the league in time of possession.

Head coach Hugh Freeze has said he isn’t overly concerned with how long his up-tempo offense has the ball with the Rebels being at their best when they move as fast as possible, but the lack of balance often killed drives when incompletions or sacks occurred. The Rebels are 12th in the league in rushing and averaged just 4.25 yards per carry.

Ole Miss trailed at halftime just three times this season despite giving up more points than any team in the SEC, but the Rebels rarely kept up in the final two quarters. A team that averaged nearly 33 points points a game averaged 7.5 points in the second half of its final seven games and combined to score 24 in the final 30 minutes in losses to Arkansas, LSU, Auburn, Vanderbilt and Mississippi State.

Those teams beat Ole Miss by an average of nearly 18 points a game.

“On the offensive side of the ball, it’s frustrating that we’re not scoring,” sophomore guard Javon Patterson said. “We’re used to going fast and getting things going, and when you get stopped, that gets frustrating. But we’ve just got to keep our poise and keep going. That builds on for next year.”

Patterson ended the season at center with Sean Rawlings and Robert Conyers injured, a microcosm of the personnel issues the offense dealt with.

Shea Patterson led four fourth-quarter scoring drives in his collegiate debut to help the Rebels rally past Texas A&M on the road, but it only masked Ole Miss’ deficiencies in an offense that was simpler yet just as predictable with the youngster behind center.

Akeem Judd became the primary back and finished his final season with 826 yards and six touchdowns, but Ole Miss struggled to develop any consistency on the ground with A&M being the only SEC game in which the Rebels ran for more than 150 yards. It allowed defenses to focus more on the passing game and get after Patterson, who completed just 52 percent of his passes in the final two games.

Ole Miss scored a season-low 17 points against a 6-6 Vanderbilt team while getting shut out in the second half against Mississippi State, which owns the SEC’s worst pass defense.

“We’ve got to coach them better,” Freeze said. “We probably expected a little bit too much out of Shea. I think everybody did. It’s kind of unrealistic to expect him to understand everything he’s seeing with the limited reps he’s had.”

Freeze called Patterson a talented piece to build the offense around while Luke expressed confidence in the ability to improve the running game should Wilkins and Swinney stay healthy next season behind an offensive line that’s returning every starter. Ole Miss is also heavily pursuing Clinton five-star running back Cam Akers, who would bring an unmatched level of explosiveness to the backfield should he sign with the Rebels in February.

There’s plenty of evaluating for the Rebels to do before then and after.

“There’s no doubt we’ve got to improve there, too,” Freeze said. “We were bad on defense all year, but offensively we declined. Some of it is we lost some really good, experienced players, but we’ve got to take a look at that side also.”