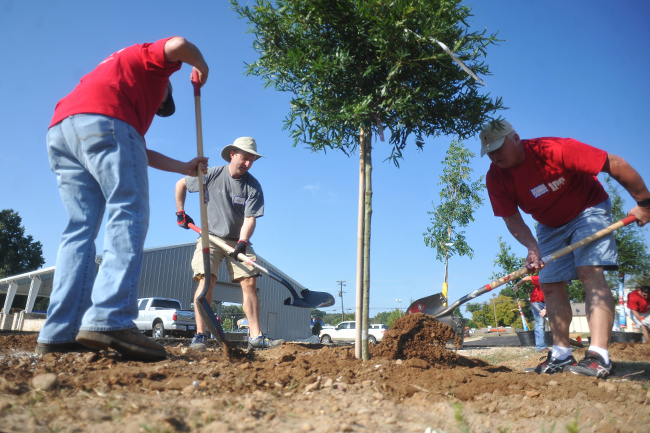 A local group of men have the means and resources, but now they are seeking the projects to make the LOU community a better place to live.

Bret Beauchamp, Brent Hardin and John Welty are among a group of men with various backgrounds who decided they wanted to take on community service projects and formed the nonprofit organization “100 Men” just over a year ago. It initially began as 10 guys who formed a board of directors and each one recruited 10 more members to form the organization.

They laid the groundwork, got some initial funding from sponsors and then decided to pick among the projects they felt they could do the most good in the community.

The surprising problem is that they have not been contacted to take on the major projects they would like. Admittedly, they decided to keep their group low-key out of fear they would be inundated with too many requests for assistance, but the opposite has happened.

“Imagine having a pocket full of money and trying to give it away and no one will take it,” said Welty, a local realtor.

“I thought we would be turning down projects,” Beauchamp added.

The members range from a contractor to emergency room doctors and all have a wide range of abilities but all have one thing in common and that is to make Lafayette County better.

“We don’t just want to show up and do something for an hour,” Hardin, who is a urologist, said. “We want to do major projects.”

“We are blessed to have members who have very expensive equipment,” Welty said. “Resources like real bulldozers. But for the most part, it’s what the average man has, like chainsaws.”

After forming their organization, the group contacted the United Way and they were asked to paint the sidewalk at Avent Park. They followed it up with doing a lot of work at Camp Lake Stevens and Camp Hopewell.  They also planted trees at the Old Armory Pavilion and did landscaping at the crisis pregnancy center.

But one of their more recent projects was doing maintenance at the sportsplex the late Michael Perry established in Lafayette County. Perry was one of six people who were killed in a plane crash in August.

Hardin said they were amazed at how Perry was able to create and manage the facility.

“Just the bush hogging was a part-time job,” Hardin said. “It’s really amazing what he did. It was kind of touching to go out there and realize one man did all of this. There were 40 or 50 of us out there for four or five hours.”

Their most successful project was a food drive they held a year ago to benefit The Pantry.

“We had no idea it would be that successful,” said Hardin, who thought up the idea after being involved in a similar drive while growing up in the Mississippi Delta.

They delivered two truckloads of nonperishable food items to The Pantry a year ago and decided they would follow it up with another food drive that will take place Saturday. Residents in Twelve Oaks, Tara, Oxmoor, Notting Hill, Northpointe, Pat Lamar Park/Old Country Club, Wellsgate, Grand Oaks and Windsor Falls can expect a plastic shopping bag and list of items to fill it.

They also plan to set up in front of Kroger and Cash Saver in the near future to accept food items, while at the same time recruit more men to join their organization.

While the purpose of the organization is helping the community, the members say it has become so much more to them.

“It’s also about the camaraderie,” Beauchamp, a pharmaceutical rep, said. “I probably would have never gotten to know these guys. It’s also about bringing a diverse group together to help the community. I’ve learned that people want to help.”

“We would love to have more members,” Welty added.

Those who would like to help with the food drive are asked to show up Saturday morning before 8 at the Strong Heart Clinic on Jefferson Davis Drive. Or for more information about “100 Men,” email them at 100menoxford@gmail.com or visit their Facebook page.