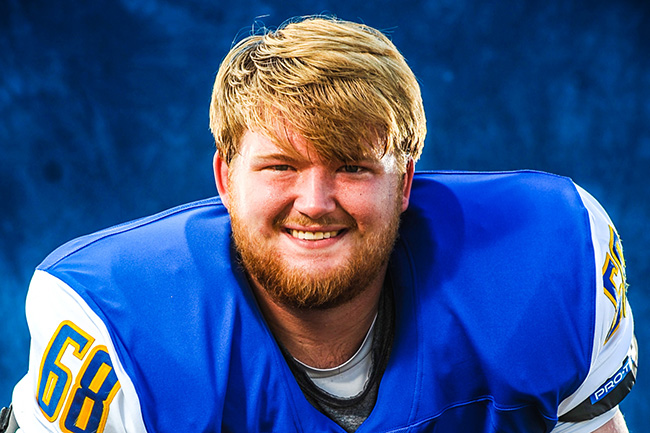 It is difficult for offensive linemen to get noticed in the recruiting process. Most scouts and college coaches look at the flashier positions such as quarterback, running back and wide receivers.

That is not deterring Oxford center Colton Skidmore.

The senior Charger spent the past week in Montgomery, Alabama with some of the state’s top talent as he competed in the Mississippi-Alabama All-Star game. He was the lone representative of the Oxford-Lafayette community after Lafayette’s Tyler Carmichael-Williams chose not to attend after last week’s state championship  victory. It was an experience that capped Skidmore’s final year at Oxford.

“It was by far an awesome experience,” Skidmore said after the game on Saturday. “It was fun just to be around the guys and play an awesome game of football.”

The week leading up to the game is one filled with practices every day which includes scouts from colleges as well as members of the media out to watch and report on what they saw. Skidmore was not lost on that and knew it was a chance to shine for six more days after having his season cut short in the playoffs last month.

During the game, Skidmore played nearly every other series as they will rotate out to make sure every player on the respective rosters will get a chance to play. As the center, Skidmore was able to work with top quarterback prospect in St. Stanislaus’ Myles Brennan, albeit it only for a week. He also snapped to Clinton standout Cam Akers as Mississippi worked in some Wildcat offense to utilize all of the 6A Player of the Year’s talents.

“It’s awesome,” Skidmore said after a practice last week. “They’re awesome football players and everything, but they’re even cooler guys to hang out with and be with all week. It’s an awesome opportunity to hang with all the big guys from the state. It’s cool just to be here.”

Skidmore was a key cog in the Chargers’ offensive line and it helped him earn the all-star distinction as well as first-team honors on the All-State team selected by the Mississippi Association of Coaches.

There is no rush for a decision with Skidmore as he plans to take the full amount of allotted time and choose his school come National Signing Day in February. For now, he just hopes last week paid off enough to earn some more envelopes in his mailbox to add to the pile.