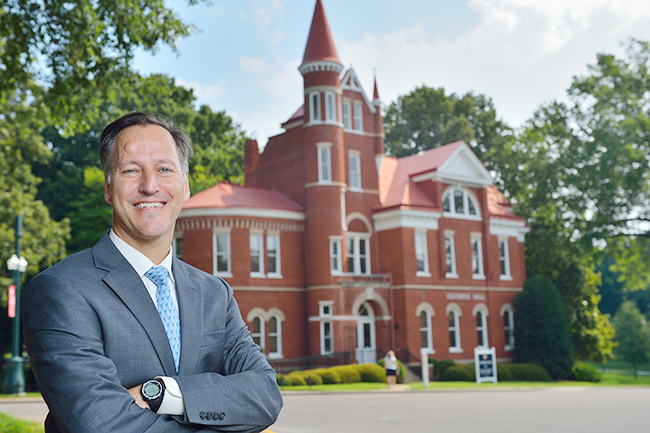 Rich Forgette will begin 2017 serving as associate provost of the University of Mississippi, bringing decades of leadership and education experience to the role.

He said he is honored to serve the university in this capacity.

“I am excited by the opportunity, humbled to be given the opportunity and privileged to work with a great team of people in the provost office,” Forgette said. “I’ll serve in the best interests of the University of Mississippi as a whole, and I’m going to work hard and try to do my very best to continue to move the university forward.”

Forgette served as chair of the UM Department of Political Science from 2003 to 2011, when he was named senior associate dean of the College of Liberal Arts. He was interim dean of liberal arts during the 2014-15 academic year.

The College of Liberal Arts is the university’s largest academic unit, and Forgette said he believes that background of general education allows him to have a better understanding of UM’s needs moving forward.

“The college delivers all the general education for all of our students so, in essence, all students are part of the college,” Forgette said. “It’s important that they be integrated as they transition in the degree program of their majors. I think having that perspective in the provost office would be helpful.”

Forgette said the role of associate provost is both to work as a team member within the Office of the Provost to assist in day-to-day management of central academic affairs, and to ensure there is an efficient line of communication between the office and all other academics offices across the university.

“I think, first as a faculty member myself, I hope to be a voice for faculty concerns and needs,” Forgette said. “As an administrator, I hope that I bring a very broad depth of knowledge of university policies and procedures grounded in my years as a chair and at the dean’s level.”

Before his arrival at Ole Miss, Forgette was an assistant professor and associate professor of political science at Miami University in Oxford, Ohio, from 1992 to 2003. Additionally he served as the 1996-97 American Political Science Association William Steiger Congressional Fellow, working in the U.S. House of Representatives and the U.S. Senate.

Aside from bringing extensive experience in teaching and research to his new position, Forgette also has recently had an opportunity to view the university from a family perspective. His son Matt and daughter Christie are enrolled in the Sally McDonnell Barksdale Honors College, studying international studies and education, respectively.

Daughter Annie is a high school junior and a prospective UM student. Additionally, his wife, Karen, is an instructor in the Department of Writing and Rhetoric.

“One of the things that will help me in this job is that I’m a parent of two students at the University of Mississippi, so I have a different view of the UM than some others,” he said.

When Forgette is not spending his time thinking or talking about the university, he enjoys running and staying active in the Oxford community in different ways.

“I am pleased and honored to be joined in the provost office by Dr. Rich Forgette,” Interim Provost Noel Wilkin said. “He is respected on campus for his administrative abilities, perspectives and knowledge of our academic programs. He brings a wealth of experience and ability to the office that will significantly contribute to our ability to facilitate the success of the university, its units and its programs.”

Forgette, along with Donna Strum, chair and professor of pharmacy administration and research professor in the Research Institute of Pharmaceutical Sciences, will assume their associate provost roles Jan. 1.