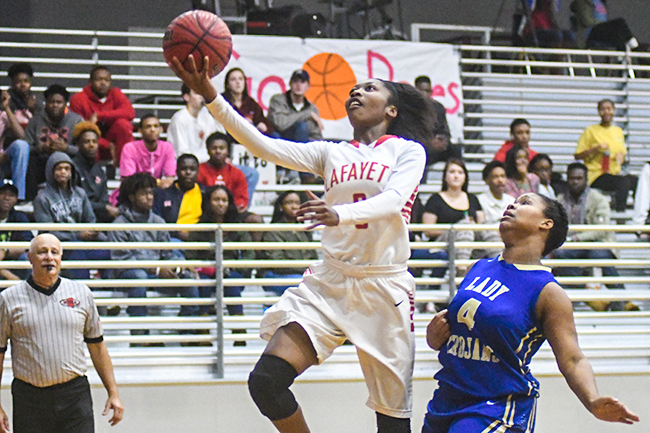 There is no slowing down the Lafayette girls basketball team. At least for now.

A week removed from their five-overtime battle with Ingomar, Tuesday night’s game with Bruce was the furthest thing from a competitive matchup. The Lady Commodores routed Bruce 68-8 inside the LHS gym.

The victory kept Lafayette perfect to start the season with a 7-0 record heading into Friday’s crosstown game with Oxford.

The tone was set quickly by Lafayette as they jumped out to a 20-0 lead after the opening quarter with senior Shaniyah Buford scoring 17 points in the first eight minutes of the game. From there, it was all Commodores.

Even with the lopsided score from the onset, head coach Shayne Linzy did not waste the opportunity to improve in a game setting.

Buford led all scorers with 20 points while Kimaya Dixon and Mariah Holland finished with seven points each. A total of 11 Commodores scored, which is something Linzy is pleased with seeing heading into holiday tournaments and the region schedule next month.

“In a lot of areas, I think we’re ahead of schedule,” Linzy said. “We’re playing really well. This team is averaging more assists than just about every team I ever coached except for one a few years ago. They’re really sharing the ball and playing great team offense and defense. It’s going to really make us difficult to slow down because (teams) are not going to be able to focus on one individual.”

Bruce finally knocked the zero off their side of the scoreboard midway through the third quarter. Ashlyn Box led the Lady Trojans (0-3) with four points.

For the second time this season, the Lafayette boys basketball team is a complete team. The Commodores played their second game since the football team finished their season, winning the state championship earlier this month. It helped bring in the senior leadership of Corey Williams and Tay Tay Owens, and the change has been noticed on the court as Lafayette defeated Bruce 53-38 for their second win of the season.

“It really helps to have Cory and Tay Tay back because they give us a defensive presence we didn’t have,” Lafayette assistant coach Clint Jordan said. “I really feel like we were more physical than the other team tonight for a first time in a while.”

Jordan filled in for head coach John Sherman, who was absent due to the death of his mother.

Bruce (5-4) battled all four quarters, but Lafayette (2-4) and their newfound physicality proved to be too much and were able to keep the Trojans at bay. Quin Davis led Bruce with 13 points while Deshontin Malone scored eight points and Raqurrius Spicer chipped in seven.

Lafayette now turns their attention to the lone matchup of the season against crosstown rival Oxford. The games will be played at Oxford High School on Friday night.