Myles Brennan taking ‘a step back’ to re-evaluate his recruitment 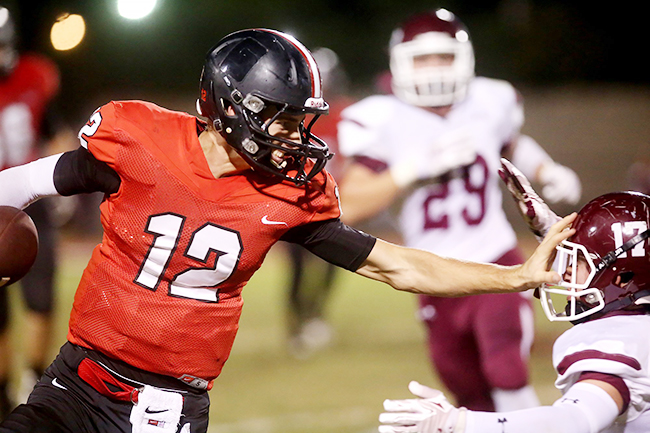 Myles Brennan did not expect to be in this situation. Two months from now, the St. Stanislaus quarterback was expected to be joining the LSU football team on National Signing Day on Feb. 1.

The phrasing of ‘was’ is due in part to Brennan making the somewhat shocking announcement of re-opening his recruitment on Nov. 30. Brennan was recruited by LSU wide receivers coach Dameyune Craig and was considered a hard commit that the Tigers would not lose. After head coach Les Miles’ firing in late September, along with offensive coordinator Cam Cameron, Brennan still appeared firm with LSU.

Then defensive line coach, and former Ole Miss head coach, Ed Orgeron became the interim head coach for the remainder of the season. Interim changed to permanent on Nov. 26 as Orgeron had his second collegiate head football coaching job.

Four days later, Brennan announced his decision to re-open his recruitment but making clear it is not a decommitment from LSU. During the press conference announcing his hiring, Orgeron stressed how he would like to have a dual-threat quarterback. That is something Brennan is not as he views himself as a conventional pocket passer, which brought on the decision and beginning a more interesting journey than he anticipated having.

“It’s been hectic,” Brennan said before competing in the Mississippi-Alabama All-Star game. “I’ve been enjoying this week that I’ve been in Montgomery. It’s kind of been a scapegoat for me to get away and kind of let that take care of itself.”

Brennan was selected as the starting quarterback for Team Mississippi and will also compete in the Under Armour All-American game in Orlando, Florida on New Year’s Day.

The decision to re-open his recruitment has created new possibilities for where Brennan could land if he decides to not stay with his verbal commitment to LSU. On Nov. 29, a day before his announcement, Oklahoma State offered the four-star prospect, bringing his number of offers to 18.

That number includes Ole Miss, which could potentially be back in the hunt for Brennan as he has planned to take an official visit to the school in January. The only wrench in that is Brennan was recruited by now-former co-offensive coordinator and quarterbacks coach Dan Werner, who was fired on Thursday, leaving the Rebels without an offensive coordinator less than two months from National Signing Day.

“The recruiting process is crazy,” Brennan said. “As LSU is going through a transition period, I’m just taking a step back and making sure I make the right decision. … (I want to know) really just how they are going to use me and my skill sets. There are a lot of schools that want a dual-threat quarterback. That’s not really my title. I like to sit in the pocket.”

With Shea Patterson heading into his sophomore season having lost his redshirt status with three games left in his freshman year, there could be a window where Brennan could find playing time if Patterson decides to leave early for the NFL.