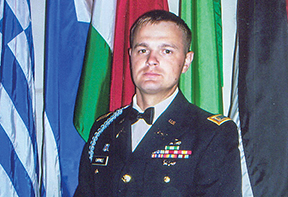 1st Lieutenant Donald C. Carwile was killed in action in Afghanistan in 2008.

U.S. Senators Thad Cochran (R-Miss.) and Roger Wicker (R-Miss.), and Representative Trent Kelly (R-Miss.) today said they expected the President to sign legislation cleared by the Senate to name a post office in Oxford for the late 1st Lt. Donald C. Carwile, who was killed in action in Afghanistan in 2008.

“I look forward to the President signing this bill so that this building can stand as a reminder of Lieutenant Carwile’s brave service and sacrifice.  I’m pleased that his life will be honored in his hometown,” Cochran said.

“Army First Lieutenant Carwile is a hero.  We will never forget his sacrifice to protect our freedoms in this great nation.  It is important to honor notable Mississippians who are willing and proud to pay that price.  Everyone who passes through the doors of the post office will be reminded of a soldier who loved his country,” Kelly said.

Carwile’s father Dennis said, “I’m really proud.  It’s an honor for me and my wife Judy.  He’s always going to be our hero.  I can’t be more pleased that this has happened.  I can’t thank everybody enough that has worked to get this done.”

Carwile was killed on Aug. 15, 2008, during a combat mission in Afghanistan as part of Operation Enduring Freedom.  Carwile, a Lafayette High School graduate, enlisted in the Army in 2006 and qualified for Officer Candidate School.  He earned numerous service awards and decorations, including the Bronze Star Medal and the Purple Heart.

The House of Representatives passed Kelly’s bill in September.  It was approved in the Senate by unanimous consent early Saturday, after being blocked earlier in the week as part of the legislative wrangling associated with the end of the congressional session.  Cochran and Wicker pressed for the legislation to be considered and approved before the Senate adjourned this weekend.